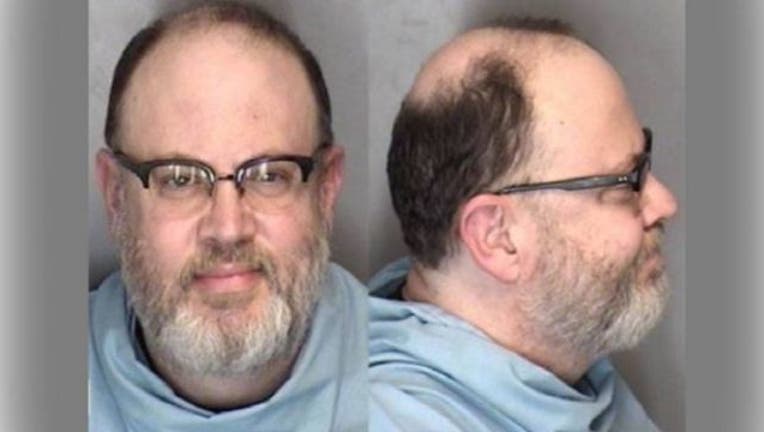 (FoxNews.com) - University of Illinois Professor Jay Rosenstein, a documentary filmmaker and vocal opponent of the school's Native American sports mascot, was arrested -- but not charged with a crime --after allegedly following and filming members of a pro-Chief Illiniwek group into a bathroom during a basketball game.

Rosenstein, who earns $120,654 per year teaching media and cinema studies, has reportedly been placed on paid administrative leave while the university investigates the incident, which occurred at the State Farm Center.

The UI police initially arrested Rosenstein for unauthorized videotaping of the mascot, but he was released from the county jail after the state’s attorney’s office declined to charge him, the News-Gazette reported.

Rosenstein told the News-Gazette his arrest came as he was trying to get footage of the mascot, Chief, putting on his costume to “document all of the ways the university employees might be involved in helping.”

The former UI mascot was officially retired in 2007, but a group on campus continues to portray him at sporting events.

Rosenstein said the members of the group were clothed at all times while he filmed and he denied accusations he recorded anyone urinating.

"I have never, ever at any time or any place, filmed or recorded anyone in a state of undress or urinating in a public bathroom," Rosenstein said. "It's an absolute, complete lie."

Instead, Rosenstein insists he was merely attempting to document whether any Illinois employees were helping the group with the unofficial appearance.

"My observations were from the vantage of the entrance to the restroom. Looking into the room from that location, I saw [the mascot] standing at the bathroom sink, fully clothed," Rosenstein said.

The mascot, Ivan Dozier, said being filmed in the bathroom was a shocking and “violating” experience.

"What Jay Rosenstein did was absolutely illegal," Dozier said. "I don't care what he saw or what he expected to see or what he didn't see. He broke the law. You should not enter a public restroom with a camera rolling. I don't care why you're trying to gather footage. I don't care what your justification would be. ... That is something that is not appropriate, especially given a context that this is a university professor that is in charge of educating students."

Rosenstein has been periodically updating his 1997 documentary “In Whose Honor? American Indian Mascots in Sports.” The film, according to Rosenstein's bio on the school’s website, is “a social issue documentary film” that “played a major role in the National Collegiate Athletic Association’s adoption of the unprecedented policy of penalizing its member schools who continue to use American Indian mascots and logos, a policy that resulted in all but a handful of schools permanently dropping their mascots.”

“’In Whose Honor?’ has directly led to the elimination of American Indian mascots, nicknames, and logos at schools at every level nationwide, as well as the adoption of policies similar to the NCAA’s by school boards in several states,” the website states. “Professor Rosenstein is recognized as an expert on the subject of American Indian mascots in sports, and has frequently appeared in the media on the subject.”