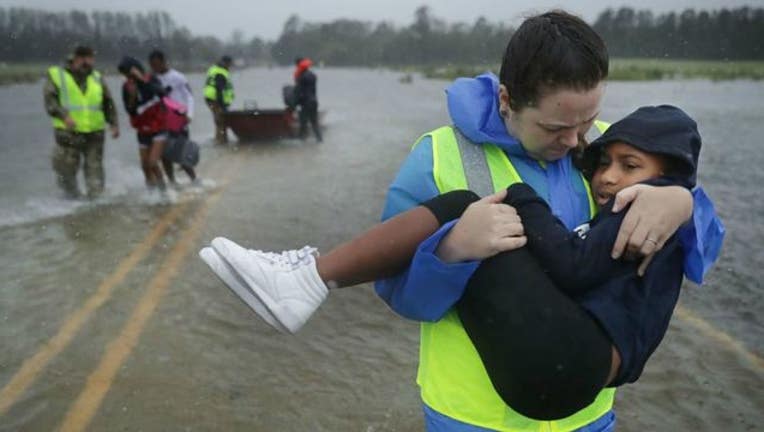 Lisa Fernandez (KTVU) - When Amber Hersel woke up Friday morning, she knew it would be an unusual day. She had driven 12 hours the day before from her home in Indiana to North Carolina, to volunteer during Hurricane Florence.

But the 29-year-old part-time photographer and full-time mom never had any idea that she would instantly become the face of the storm, after a Getty photographer captured a poignant moment of her carrying a 7-year-old girl to safety.

“I’m just your average mom,” Hersel said incredulously, speaking from a community shelter and noting she’d already been interviewed by the CBC and CNN’s Anderson Cooper. “I’m just doing what I can.”

The photograph, taken by Getty photographer Chip Somodevilla, who couldn’t be immediately reached, was used as the lead image in stories stretching from the New York Times to Fox affiliates across the country.

Her supervisor, Brandon Graham, quickly chimed in. “It’s just amazing,” he said of all the publicity. “It’s been out of this world. We could never have fathomed we’d have so many people acknowledge what we’ve been doing.”

Both Hersel and Graham are with the Civilian Crisis Response Team, an Indiana-based civilian volunteer group “committed to helping the people in our communities during their times of greatest need.”

Since August 2015, organizers said they have grown to more than 1,000 members in nine states.

Hersel, who had dropped her own children, ages 6 and 7, off with Grandma, had volunteered once before during a small-scale flooding operation in her home state.

But she’d never done anything of this magnitude before, which included driving 800 miles from her home in Evansville, Indiana and then taking a boat in order to save families from rising waters in James City, a small town along the Neuse River in North Carolina.

The local fire department asked her group of about 20 volunteers for help, and she said her crew eagerly responded.

Hersel, like her peers, was dispatched to help families safely leave their homes. On one of her trips, captured in the photograph, she is seen wearing a neon vest, hugging 7-year-old Keiyana Cromartie, to her chest and looking down to avoid getting smacked by the rain.

It’s impossible to tell what the two might have been talking about in the photograph.

But in an interview, Hersel filled in the blanks.

Hersel added that the girl wasn’t crying. “She was very brave, a little nervous.”

And Hersel said that after she brought the girl to safety, she went back to retrieve the rest of her family, which includes five siblings and her parents.  Hersel’s own daughter is the same age as Keiyana.

In all, Graham said their group rendered medical aid and rescue efforts to about 75 people on Friday.

Hersel, who noted the odd coincidence of being a photographer herself, said the rescue efforts and the immediate fame was overwhelming, but worth it. And she said she is ready for more.