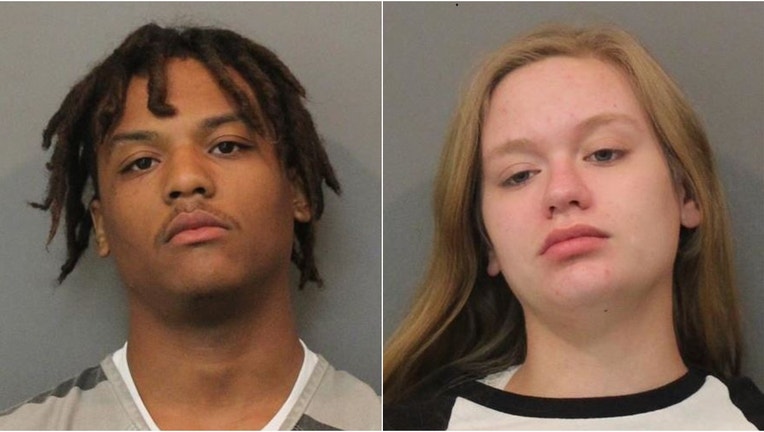 HOBART, Ind. - A northwestern Indiana couple allegedly used a car to force two teenage boys off a road, angered that the twin brothers were riding bicycles adorned with flags supporting President Donald Trump, before ripping one of the sibling's flag from his bike, police said Friday.

Police Capt. James Gonzales said the Hobart couple are accused of driving in their car, running the 14-year-old boys off of the road, and making threats toward them.

According to a probable cause affidavit, the boys told officers that a vehicle with a man driving and woman passenger followed them before the male driver pulled up nearby and asked one of the boys “if they were Trump supporters” - to which the boy replied that they were.

The driver then swerved at the boys, forcing them onto roadside grass to avoid being struck, according to the affidavit. The driver followed the boys before exiting the car and tearing off the flag from one of the brother's bikes, the affidavit states.

The driver dropped the flag, which was affixed to the bike with fishing pole, ran back to his car and drove off, “but not before running the flag over,” it states.

Related: Rod Blagojevich sits down with FOX 32 for first 1-on-1 interview after Trump commutation

Both Perry-Jones and Smith have been charged with two felony counts of intimidation and criminal recklessnes. They were also charged with one count each of theft and criminal mischief, both of which are misdemeanors.

Smith was in custody but Perry-Jones remained at large Friday evening, police said. Online court records do not list attorneys who could speak on behalf of either of them.

Gonzales said the charges weren’t filed until Thursday because there was a delay in detectives getting information from Snapchat, The (Northwest Indiana) Times reported.

In a video posted to Snapchat, allegedly by the couple of their encounter with the boy, shows “the driver turns the wheel sharply as if he saw the boys and wanted to hit them with the vehicle while yelling `ya'll better get home,'" according to the affidavit. A male's voice is then heard telling the female passenger “pull that flag down" in the video which shows the female trying to reach it through her window and her saying, “get closer."

“The female is then heard saying `ya'll scared, just like your president'' and `America is not great'" followed by an expletive, according to the affidavit.

In a second Snapchat video, Perry-Jones allegedly says, “Don't let me see you downtown" to one of the boys and threatens to beat him up.