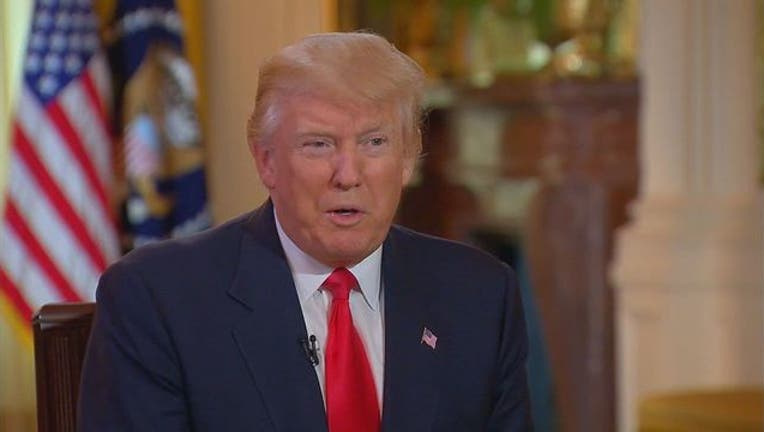 WASHINGTON (AP) - President Donald Trump is embracing government numbers he once maligned as "phony" as he tries to take credit for the latest U.S. jobs report.

What a difference from last year's presidential campaign, when Trump repeatedly assailed the report's legitimacy.

Back then, candidate Trump denounced "phony unemployment numbers" he claimed had been invented to make the Democrats look good.

"Don't believe those phony numbers when you hear 4.9 and 5 percent unemployment. The number's probably 28, 29, as high as 35," he said last February, on the day of the New Hampshire presidential primary.

"The 5 percent figure is one of the biggest hoaxes in modern politics," he said.

That's last year's 5 percent, not the new numbers reported on his watch.

Asked about the apparent disconnect, Spicer offered a smile and a quip: "I talked to the president prior to this, and he said to quote him very clearly: 'They may have been phony in the past, but it's very real now.'"

During a speech at the Detroit Economic club last year, Trump pointed to figures that show one in five American households do not have a single member in the labor force. He failed to mention the one in five includes children, young people in school and senior citizens who are retired.

Though the jobless report has been criticized by others for omitting people who aren't actively searching for work, it provides a benchmark that is similar to most other nations.

While business and consumer confidence have risen since the presidential election, economists also say it's too soon for Trump to be taking credit for jobs.

"No new economic policies have yet been enacted," said Scott Anderson, chief economist at Bank of the West. Instead, he pointed to an unusually mild winter that likely boosted hiring by construction firms.

Cold weather in February typically shuts down work sites across much of the country. But last month was the second-warmest February since 1895, helping construction firms add the most new jobs in a decade.

A survey of small businesses shows that their optimism is up since the election, reaching the highest level in 12 years in January, according to the National Federation of Independent Business. Other measures also show greater business confidence.

But many of the corporate announcements of new jobs that Trump has promoted - by ExxonMobil, Intel and Ford, for example - will take place over many years and were already planned before the election.

Trump and Republicans have been quick to claim credit nonetheless.

Spicer, meanwhile, may have jumped the gun with his tweets. A 1985 rule bars executive branch officials from commenting publicly on economic data until at least an hour after its release. Jason Furman, President Barack Obama's top economic adviser, said on Twitter that the rule was intended to prevent White House officials, some of whom see the report a day early, from immediately spinning the data.

Spicer downplayed that mini- controversy, saying he didn't think happily touting news that had been widely reported was "exactly a market disruption."

"I apologize if we were a little excited and we're so glad to see so many fellow Americans back to work."

This story has been corrected to correct Spicer quote: 'it's very real,' not 'they are.'