“I will code what I really want to say to Donald Trump,” Lightfoot said. “It’s two words. It begins with ‘f’ and it ends with ‘you.’"

CHICAGO - Chicago Mayor Lori Lightfoot reacted angrily Friday to President Donald Trump’s threat to take action against protesters in Minneapolis, accusing him of trying to “inflame racist urges” while encouraging people planning to protest in her city to stick to social distancing guidelines.

Lightfoot was responding to a Trump tweet in which he wrote “when the looting starts, the shooting starts,” in response to the sometimes violent protests in Minneapolis over the Monday death of George Floyd, a handcuffed black man who gasped for air and pleaded for help while a white police officer knelt on his neck for several minutes. Twitter quickly flagged Trump’s tweet as a violation of its rules against “glorifying violence.”

“I will code what I really want to say to Donald Trump,” Lightfoot said. “It’s two words. It begins with ‘f’ and it ends with ‘you.’ I will not remain silent while this man cynically tries to turn this incredibly painful moment into one for his own political gain.” 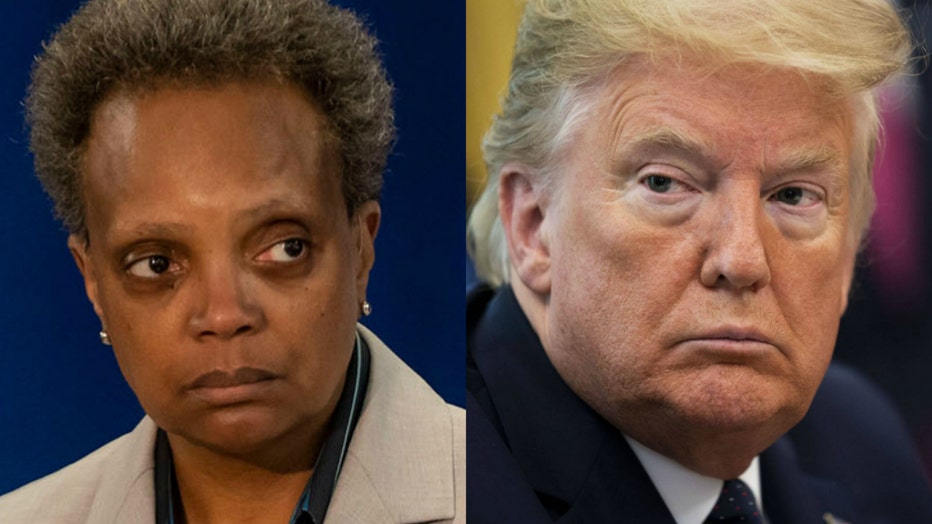 Lightfoot, a former federal prosecutor, is the city’s first black female mayor. She ran for office after former mayor Rahm Emanuel decided not to seek another term, when he certainly would have been dogged by questions about a white city police officer who shot a black teenager, Laquan McDonald, 16 times in 2014. The officer, Jason Van Dyke, was later convicted of murder and sent to prison.

Lightfoot has repeatedly clashed with Trump over the city’s approach to violent crime and immigration.

Democratic Gov. J.B. Pritzker had a similar reaction when asked about the president’s tweet, saying Trump’s “failure to address the racism that exists in America is stoking the flames (and) is completely unacceptable. It’s reprehensible. I’m outraged by what he does in response to these situations.

“I cannot imagine the rage and the fear that must be felt by a black American watching what happened to George Floyd, the threat that comes to every black American — under color of law — that they see in a video like that,” Pritzker said during his daily news conference on the coronavirus crisis.

Illinois Governor JB Pritzker did not mince his words when asked about President Trump's tweet regarding protesters in Minneapolis following the death of George Floyd.

Lightfoot asked anyone planning to hold or attend protests in Chicago this weekend to be peaceful, wear face coverings and take other precautions to guard against the spread of the coronavirus, which is still prevalent in the city.

“Please march, exercise your rights but wear face coverings,” she said. “Bring hand sanitizer. Ensure distance between one another even as you’re marching.”

Even though Chicago is still reporting new COVID-19 cases every day, Lightfoot announced plans to begin loosening restrictions on businesses and public amenities on Wednesday.