Steve Maldonado was arrested at Orlando International Airport on Wednesday by FBI agents. He is accused of participating in the Jan. 6 insurrection at the Capitol. His mother tells FOX 35 News that his son was not in Washington, D.C. on that day.

ORLANDO, Fla. - A Florida man who was identified to FBI agents as being inside the U.S. Capitol during the January 6th riot was arrested Wednesday at Orlando International Airport.

Steve Maldonado was arrested at the airport by FBI agents, a spokesman for the U.S. Attorney’s Office said in an email. He is at least the thirteenth person from Florida to be arrested for the Jan. 6 insurrection at the Capitol, according to a Justice Department list of defendants charged in federal court in the District of Columbia.

According to a criminal complaint, two people who had known Maldonado for years recognized him during news coverage of the riot, and a third person shared with them videos Maldonado had sent from inside the Capitol. One of the people then went to the FBI with the videos. 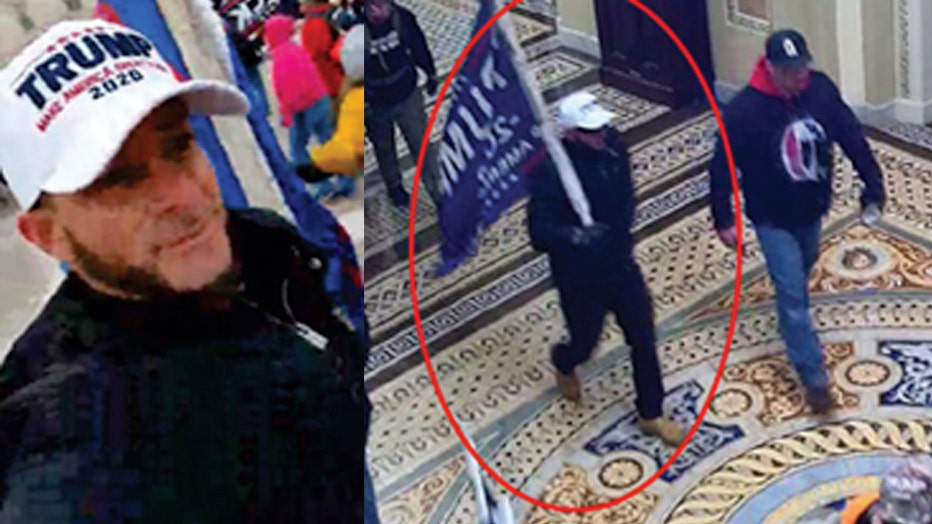 The people who knew Maldonado also recognized him in a photo on an FBI website containing images of people wanted for participating in the Capitol breach. The image shows Maldonado wearing a white "Trump" hat and waving a large blue flag, officials said.

FBI agents interviewed Maldonado at his home in early February, and he admitted to entering the U.S. Capitol and going to the Senate, the criminal complaint said.

Maldonado is facing charges of entering a restricted building and disorderly conduct with the intent to disrupt government business.

A Florida man who was identified to FBI agents as being inside the U.S. Capitol during the January 6th riot was arrested Wednesday at Orlando International Airport.

During an initial appearance in federal court in Orlando on Wednesday, Maldonado asked for a public defender to represent him. He was released on an unsecured bond of $25,000, ordered to surrender his passport and instructed that his travel would be limited to central Florida and the District of Columbia, where the case was transferred.

Michael Ryan, who was appointed to represent Maldonado, didn’t immediately respond to an email inquiry.

A member of the far right nationalist group, Proud Boys, walked out of a federal courthouse on Wednesday in Orlando. Joe Biggs is accused of being involved in the riot earlier this month at the U.S. Capitol Building.

A mob objecting to the presidential election victory of Democrat Joe Biden broke into the Capitol last month as members of Congress met to certify the results. Five people died in the violence, including a Capitol police officer.

Trump is on trial this week in the U.S. Senate after being impeached in the U.S. House. House prosecutors say Trump encouraged a rally crowd to head to the Capitol and then did nothing to stem the violence.