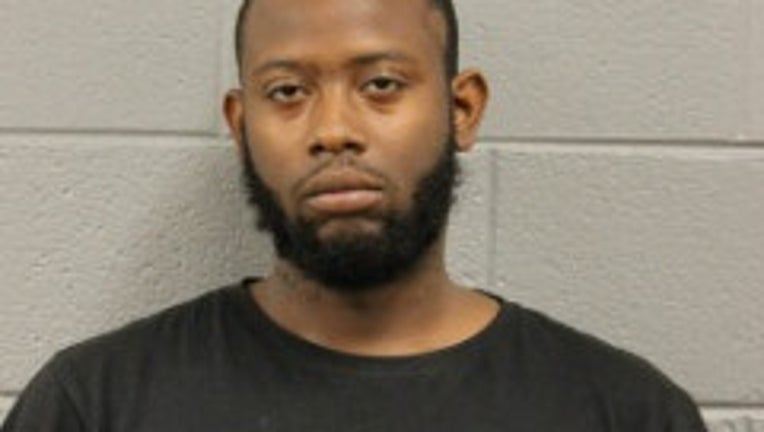 CHICAGO - A GPS bracelet a man was wearing from a pending domestic battery case placed him inside his girlfriend’s Lawndale apartment when he shot and killed her ex-boyfriend, Cook County prosecutors said Friday.

Although 27-year-old Barlow’s girlfriend had recently begun seeing him, she lived with Martin Coleman, the man she had dated previously for three years, prosecutors said.

Last week, before Coleman was killed by Barlow, Coleman punched the woman in the face during a fight in their apartment, in the 1800 block of South Komensky Avenue, prosecutors said.

The woman left the apartment to stay with her a cousin. The next morning, she called Barlow to give her a ride. He picked her up and they drove around before attending a party in Maywood.

Throughout the day, Coleman, 27, texted the woman, first apologizing but later starting another argument, prosecutors said.

When the couple returned to the woman’s apartment about 5 a.m. Sunday, they made sure Coleman wasn’t home and fell asleep on her bed. The woman woke up to the sound of footsteps about an hour later and found Coleman standing in the doorway of the bedroom, prosecutors said.

Barlow also woke up, immediately grabbed the gun that he had left on a nightstand, and allegedly fired two shots at Coleman. Afterward, Barlow gathered his belongings, told the woman to call 911 and jumped out of the apartment through a window, prosecutors said.

Coleman was not armed and hadn’t said anything or made any movements towards the pair when he was shot, prosecutors said. He died of a gunshot wound to his armpit and his hip area.

Barlow was ordered held without bail Friday for Coleman’s murder.

He is expected back in court on Sept. 23.