A massive fire that broke out Thursday morning at a warehouse in west suburban Bartlett continued to burn on Friday.

BARTLETT, Ill. - A massive fire that broke out Thursday morning at a warehouse in west suburban Bartlett continued to burn on Friday.

Officials said it may be days before firefighters are able to completely extinguish the fire that tore through the massive warehouse.

There was still plenty of smoke and occasionally some flames visible as firefighters perched on aerial ladders continued to pour water on the blaze.

The fire started just before 10 a.m. Thursday morning in a 250,000 square-foot warehouse that stored documents and records, most of it paper.

It was managed by an international document storage company called Access.

Not everything burned, though. Hundreds of documents could be seen blowing around the field south of the warehouse, many with proprietary information like social security numbers and bank records.

In a statement, a spokesperson for Access said: "We are working now to contain the site as thoroughly and as quickly as possible."

State Fire Marshall investigators were also on scene trying to determine what sparked the fire. 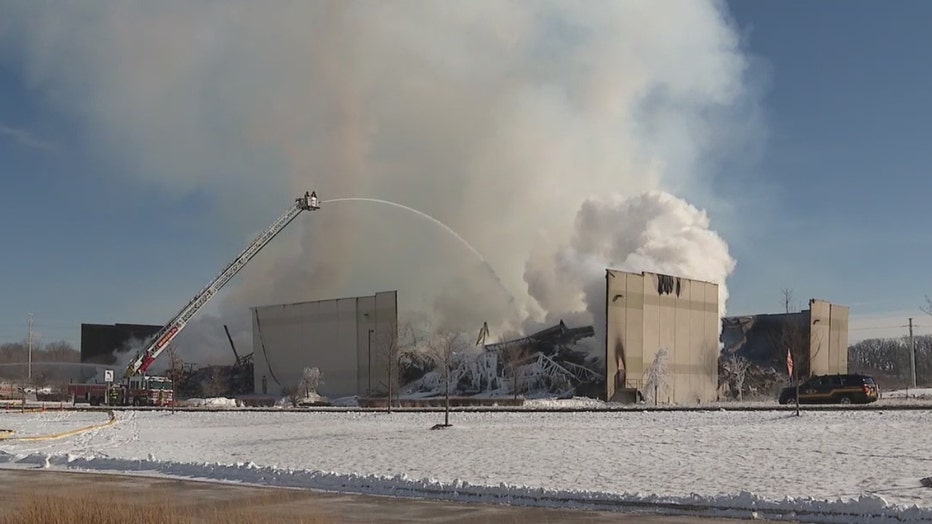 About 40 firefighters were pouring 3,000 gallons of water a minute from four aerial hoses.

The chief of the Bartlett Fire Protection District said the next step is to knock down the exterior walls that are still standing, so firefighters can get closer to the fire.

"Once we get these walls down and we can get closer to what's burning in there to help extinguish that, and then we can actually get some heavy machinery in there to start pulling that debris out of that building," said Chief Willian Gabrenya, chief of the Bartlett Fire Protection District. "We've got approval to start moving some of that debris into these fields here, so we've got fencing coming for that."

Heavy equipment has been moved into place on one side of the building to begin pulling down walls Friday evening.

Gabrenya said the weather has complicated matters, creating many slick spots and causing firefighters to slip and fall.

The good news is nobody has been hurt.

The chief added it’s likely the fire will continue to burn at least through the weekend.