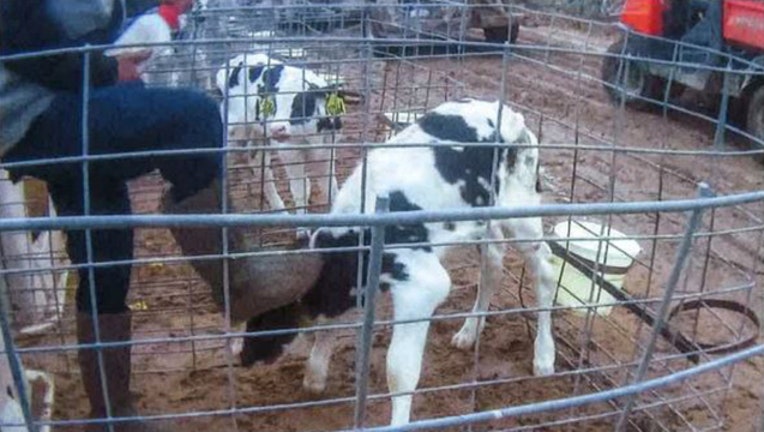 The Newton County Sheriff's Office said officers were searching for the three suspects in the alleged animal abuse at Fair Oaks Farms. Video released last week by the animal rights group Animal Recovery Mission shows calves being thrown, kicked in the head, hit with steel rods and burnt with branding iron s by workers at the popular agritourism destination.

It's unclear whether the men have attorneys who could speak on their behalf.

Investigators said other "persons of interest" were being interviewed in the case. Many of the conversations in the video released by the Miami-based Animal Recovery Mission involved people speaking Spanish.

Sheriff Thomas VanVleet said Monday in a statement that "details of the investigation cannot be released at this time as this investigation is still active."

The Associated Press left a message Tuesday with the sheriff's office seeking additional details on its investigation into the alleged abuse at Fair Oaks Farms' dairies about 70 miles (113 kilometers) south of Chicago. Farm officials say the farm draws about 500,000 tourists a year.

Newton County Prosecutor Jeff Drinski said Monday that Fair Oaks Farms "has cooperated completely in our attempts to identify and interview all persons involved in the videos that we have all viewed over the past week."

Fair Oaks Farms founder Mike McCloskey said in a statement last week that four employees seen in the video had been fired and actions have been taken to prevent further abuse. A fifth person shown in the video was a third-party truck driver who was transporting calves, he said.

Fair Oaks Farms is the flagship farm for Fairlife, a national brand of higher protein, higher calcium and lower fat milk. Some retailers have also pulled Fairlife products from their shelves, including Chicago-area groceries Jewel-Osco and Strack & Van Til and Family Express, which operates convenience stores across Indiana.

On Friday, Fair Oaks Farms suspended its home delivery service of milk, cheese and other products for one week, in part to protect drivers it says are facing harassment over the video.