A new initiative was launched Wednesday to focus on cases of women who've been missing for years.

CHICAGO - The Cook County Sheriff's Office launched a new initiative on Wednesday to focus on cases of people who've been missing for at least three years.

Sheriff Tom Dart said the goal of the project is to bring attention to their stories, with an initial focus on missing women.

Dart was joined by the family of 56-year-old Viola Martin, who went missing in 2009 from Glenwood. Her car was later found in Dixmoor.

Martin's three daughters have been working closely with the sheriff's office as part of the project.

"We urge anyone with information to please come forward," said Latrina Martin. "Our mom is loved and missed by all of us." 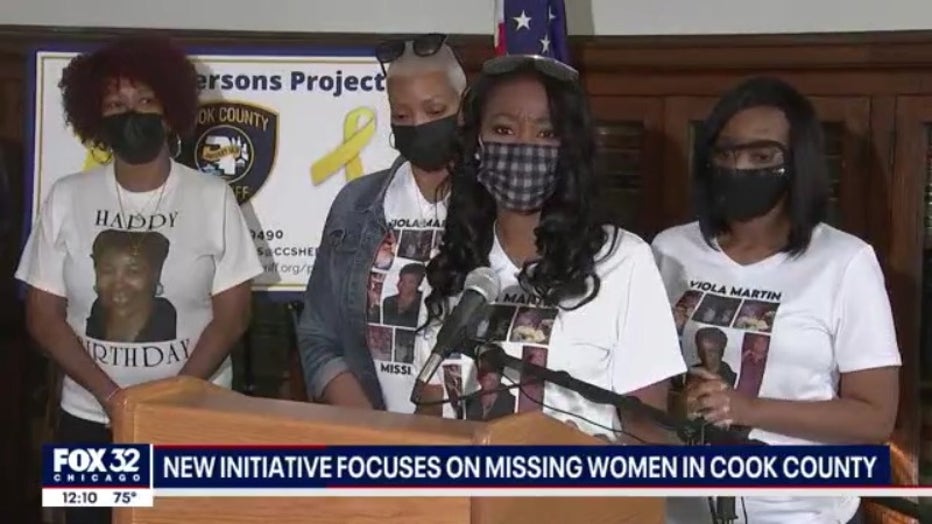 Dart says most cases involving women are often overlooked and he hopes by sharing their stories, new information will be brought to family and friends who have been seeking answers for a long time.

"These are incredibly challenging cases to solve and behind each of them are family and friends just left devastated and worrying with no answers," Dart said in a statement. "The families of these missing women deserve the public’s attention and help in trying to find answers."

Yasmine Acree has been missing for 13 years. Some family members believe the honor student, who was 15 at the time, was abducted after leaving her West Side home.

Her cousin, Pastor Ira Acree, said the hardest part is not knowing what happened.

"We’ve heard rumors in Cook County that some gentleman knows something about Yasmine and he participated in her death," said Acree.

The project covers everyone that has been reported missing in Cook County since 1930, which includes about 170 people.

Each of the cases will be featured on a new Missing Persons website as well as the sheriff's office's social media channels to help generate tips.

For more information on the Missing Persons Project, or to provide tips and information about these cases you can visit the website or call 773-674-9490 or email CCSO.MissingPersons@CCSheriff.org.