A vigil was held for NYPD officers Jason Rivera and Wilbert Mora on Wednesday, attended by their fellow brother officers, members of the clergy, the local community and more.

NEW YORK - New York City Police Officer Wilbert Mora was a hero in death as well as in life.

Mora and Police Officer Jason Rivera were fatally shot inside an apartment in Harlem on Friday. Rivera, 22, died that night at Harlem Hospital. Mora, 27, was taken off life support at NYU Langone Medical Center on Tuesday.

"For choosing a life of service. For sacrificing his life to protect others. For giving life even in death through organ donation," Sewell tweeted on Tuesday. "Our heads are bowed & our hearts are heavy."

Mora donated five organs — his heart, liver, pancreas, and both kidneys, which saved five lives, according to LiveOnNY, an organ procurement organization.

LiveOnNY President and CEO Leonard Achan praised Mora and his family for their "heroic gift of organ donation."

"Based on the medical urgency of waiting recipients, 3 individuals in New York and 2 people outside the state of New York received life-saving organ transplants from Officer Mora," Achan said in a statement. "We are humbled and honored to be the steward of these gifts on behalf of Officer Mora and his family so others may live on."

Hundreds of police officers came to the iconic St. Patrick's Cathedral in Midtown during a viewing for Police Officer Wilbert Mora, who was killed in the line of duty.

"NYPD Officer Wilbert Mora cared deeply for his community. He leaves behind a lasting legacy of unwavering service as a police officer in New York City and as a lifesaving organ donor," the post stated. "Because of his and his family's selfless gifts, 5 lives were saved. LiveOnNY mourns the loss of this amazing hero and our hearts and support will continue to be with the Mora family."

LiveOnNY is a federally designated nonprofit organization that facilitates organ donation and transplantation.

"Our teams work with local hospitals and transplant centers to deliver the gift of life to the nearly 10,000 New Yorkers currently waiting for a lifesaving organ transplant," LiveOnNY states on its website. "We also care for the families of the selfless organ donors and advocate for this lifesaving cause."

Mora started at the NYPD Police Academy in October 2018. He was assigned to the 32nd Precinct in Harlem in November 2019.

"Wilbert Mora was a hero. He served his city, protected his community and gave his life for our safety," Mayor Eric Adams said in a Tweet. "Our hearts are heavy. Our city is in mourning."

The wake and funeral for Mora will be held at St. Patrick's Cathedral next week. 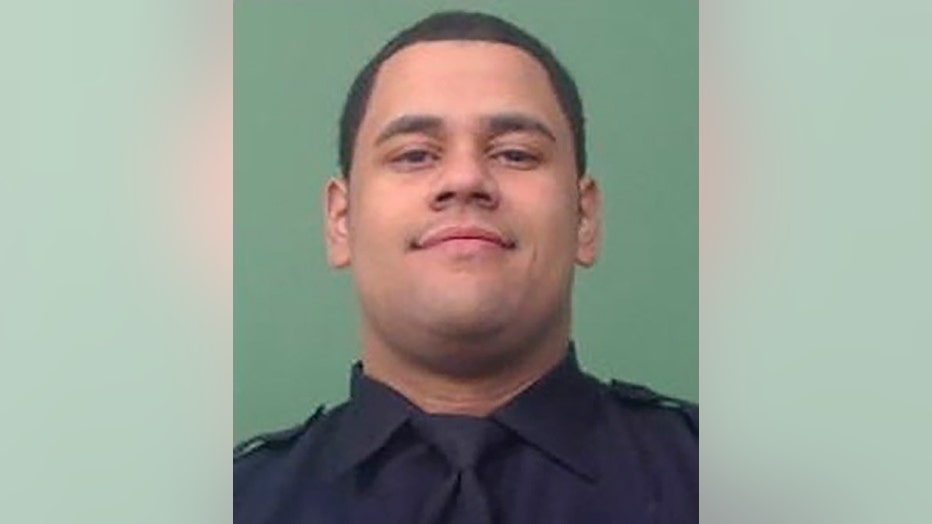 Jan. 22, 2022 — Police Officer Jason Rivera, who was shot to death while responding to a call in a Harlem apartment, came from an immigrant family and grew up in a community with strained police relations but joined the NYPD to make a difference in the "chaotic city," he once wrote.

Sept. 30, 2021 — Florida authorities described Deputy Joshua Moyers as "a hero even after death." The sheriff’s office announced his organs were donated to five people, including a 29-week-old child.

A procession to Riverdale Funeral Home was held for NYPD Officer Wilbert Mora.