The Local School Council of Jones College Preparatory High School voted early Wednesday to recommend the firing of their principal amid complaints that he mishandled teacher misconduct complaints and fostered an unwelcoming environment for some students and staff.

CHICAGO - The Local School Council of Jones College Preparatory High School voted early Wednesday to recommend the firing of their principal amid complaints that he mishandled teacher misconduct complaints and fostered an unwelcoming environment for some students and staff.

The vote, taken after a nearly seven-hour public meeting, pushed the LSC’s broken relationship with Principal Joseph Powers into further turmoil and threatened to divide one of Chicago’s highest-rated high schools.

Three LSC parent representatives, including the chair, wrote a letter to CPS CEO Pedro Martinez last month alleging Powers has violated the district’s residency requirement by maintaining a primary home in Missouri, improperly handled misconduct complaints against teachers and did not welcome students and staff of color and transgender and gender non-conforming students.

The three put their concerns for a vote before the entire 13-member LSC Tuesday night.  It called on Martinez to approve administrative charges against Powers and begin dismissal proceedings. Under state law, the CEO would have 45 days to either approve or reject the request. 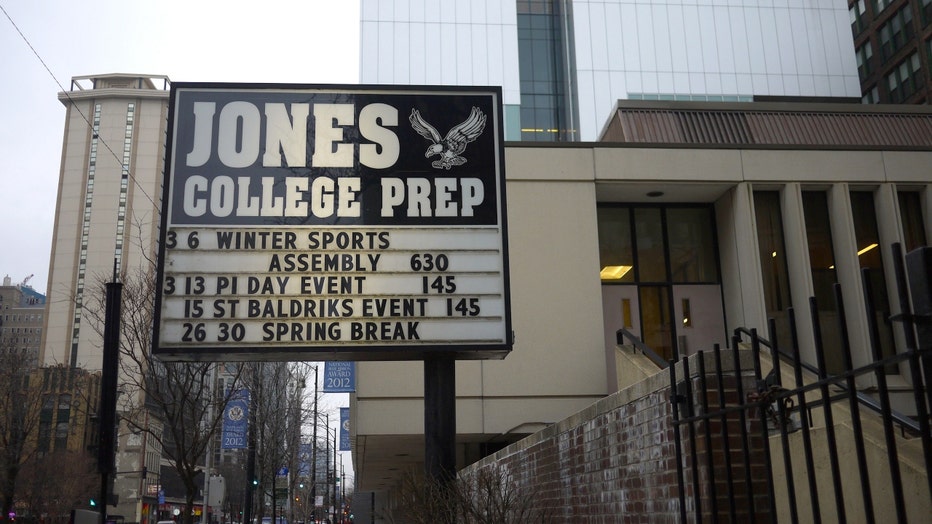 The measure passed 8-2, with the three student representatives ineligible to vote on personnel matters. The two dissenting members were Troy Hilbrands, the school’s director of development, and Kimberly Bowman, a math teacher. Bowman and the other teacher representative, Ellen Martinsek, said they had surveyed staff and their split vote represented the views of all Jones teachers, not their own.

In the days leading up to the vote, Powers said he was considering retirement in a letter to the school community.  But some parents, staff and student members of the LSC came to his defense — or at least criticized the process by which the three LSC members aired their concerns.

Sarah Kaiser, whose daughter is a senior at Jones, said she wished there was more parent and student input before the LSC representatives wrote their letter because "so many people in this situation were just completely blindsided by this happening.

"If these allegations are found to be true — and there are serious issues — then I hope it’s addressed," Kaiser said. "I don’t think it was gone about in the way it should have been."

Kaiser said she has appreciated Powers’ leadership, calling him a "well-loved principal," and felt he has been transparent and appropriately handled problems at the school. Addressing the complaint that Powers hasn’t welcomed LGBTQ students, Kaiser said her daughter, who is gay, has had a fulfilling experience in the school’s Pride Club and appreciated the school’s attention to students’ pronouns and bathroom signage.

But Cassie Creswell, the LSC chair and a frequent critic of CPS officials, maintained that the concerns are widespread. "The need to remove the principal is about student safety, both accountability for past harm and preventing future harm to students, staff and families," she said this week.

CPS general counsel Joseph Moriarty told Creswell and the other two LSC members who wrote the letter that the district sees no reason to remove Powers while it investigates the allegations. "At this time, the investigative bodies have not indicated that circumstances exist to justify the removal of Dr. Powers," he said in his response letter last week.

The public comment portion of Tuesday’s meeting was contentious, with spats breaking out over changing time limits for public comment and bylaws of the council’s code. Parents and students had differing views of the school and its principal.

"I have no personal experience with Dr. Powers, but that’s precisely the problem," said Maya Smith-Munyi, a sophomore at the school. "He doesn’t feel like a principal the same way that Jones doesn’t feel like a school, so there’s a severe lack of school spirit, school pride, culture participation on the part of the students, as well as Dr. Powers himself."

Current and former students spoke of racial barriers they faced at the school, like a lack of outreach toward parents who didn’t speak English as a native language.

"I think a lot of parents here are wearing rose-colored glasses and saying, you know, ‘Jones is not perfect, but it’s a great place.’ It’s a great place for who? I really enjoy Jones. I got into college here at Jones. I love this school," said Daniel Andrade, a student and member of the LSC. "But there are systemic changes that need to be made to uplift lessons of color, which I just don’t see. And student testimonies from today have shown that students of color are not really being supported."

After the vote, Violeta Cerna-Prado, a community member of the LSC who voted in favor of bringing administrative charges against Powers, said she always tries to prioritize marginalized groups in her role.

"I do know that a lot of these issues are very systemic, but they can also be perpetuated by school leaders," she said. "I hope to see one day a school leadership that reflects accountability and embraces it, especially in moments of discomfort."

Max Stein, the parent of a freshman at the school, said he knows "there’s room for improvement on any number of important issues," but he didn’t appreciate the way by which the LSC had gone about addressing them.

"Those tactics … seemed to me to have lost sight of the ways in which Jones is succeeding and how those actions might peril those successes. At the same time. I am worried that the continued use of these tactics by the LSC will further harm the Jones community."

K.K. Cleland, a parent of three Jones students, said Powers changed the school for the better. "He was insistent that students be known and feel welcome. And I want to reassure to families who are listening: Hang in there. This LSC too shall pass, and whatever happens tonight, it’s not the end."