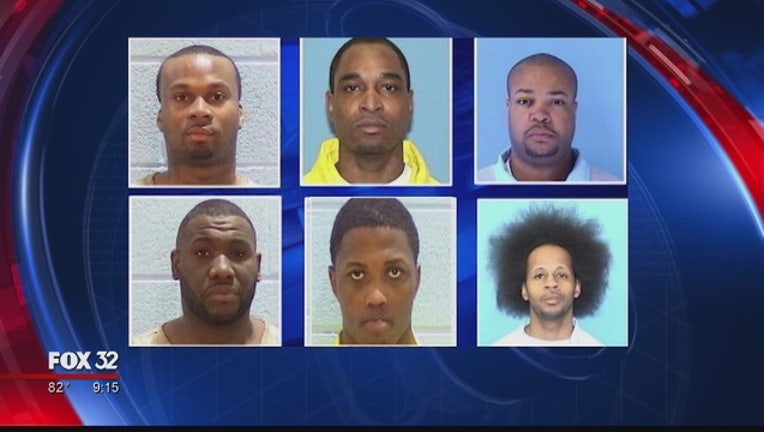 CHICAGO (AP) — Federal prosecutors on Thursday told jurors at the largest street-gang trial in recent Chicago history that the Hobos gang lived by the motto, "the earth is our turf," saying the credo required the killing of perceived enemies like one former gang associate who was poised to testify against them.

Government attorneys spoke as closing arguments began in the racketeering conspiracy trial of purported Hobos boss Gregory "Bowlegs" Chester and five of his alleged lieutenants, saying the Hobos intentionally fostered a reputation for brutality to maintain their criminal empire.

"'The earth is our turf'... (were) words these six defendants lived by," said prosecutor Timothy Storino. "For over nearly a decade, the Hobos left havoc on their earth — the South Side of Chicago ... and they murdered people who got in their way."

The three-month-old trial in U.S. District Court in Chicago is drawing to close as a particular deadly year ends in Chicago with more than 700 homicides recorded since January. The Hobos had fewer members than other Chicago gangs, but were well organized, well-armed and, said Storino, quick to kill.

He said defendant and alleged Hobos hitman Paris Poe killed gang member-turned-informant Keith Daniels in 2013, days after Chester's arrest and after Daniels testified against the Hobos to a grand jury in the same federal courthouse in Chicago. Poe allegedly stood over Daniels and shot him repeatedly with a .45-caliber pistol as his two small stepchildren screamed nearby.

"This was a murder to send a message, like other Hobos murders: You don't snitch on the Hobos and think you'll get away with it," another prosecutor, Derek Owens, told jurors later Thursday.

The indictment links the defendants to nine murders and multiple heists, including the robbery at gunpoint of then-NBA player Bobby Simmons' $200,000 diamond chain.

Their murders were often brazen, with many done in broad daylight, Storino said, including a drive-by shooting that killed two rival gang members outside a funeral home.

Six defense lawyers will also address jurors during closing arguments that are expected to last at least four days.

Chester testified during the trial, telling jurors the Hobos gang didn't even exist despite his full-arm tattoo with "Hobo" on it. Chester, born with a rare bone disease that badly deformed his legs, also scoffed at the idea someone with such a disability could rise to the top of a Chicago gang.

"The way he led the Hobos was not with his legs but with his head," said Storino. "This guy is smart as hell." And he added about the existence of the gang: "The Hobos are real. They're sitting right here."

The fear prosecutors say the Hobos instilled was even on display at the trial. One witness refused to speak against the gang, telling the judge, "I choose not to testify for the sake of me and my family." He was held in contempt and given a 60-day sentence.