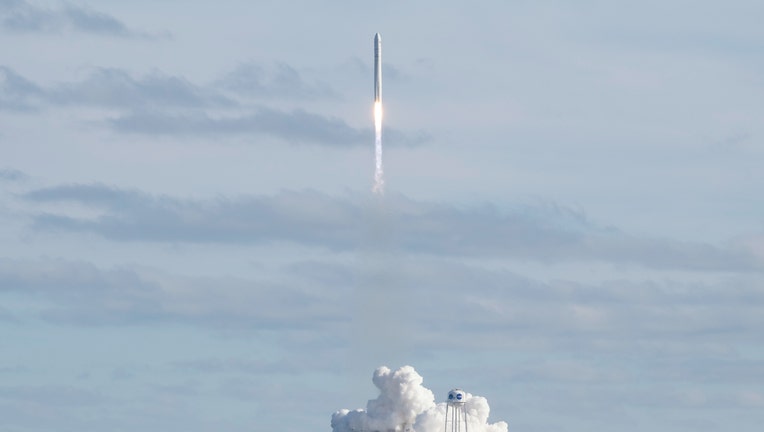 CAPE CANAVERAL, Fla. - A cargo ship rocketed toward the International Space Station on Saturday, carrying candy and cheese to satisfy the astronauts' cravings.

Northrop Grumman launched its Cygnus capsule from the Virginia seashore. The nearly 4-ton shipment should arrive at the orbiting lab Tuesday. It took three tries over the past week to get the Antares rocket off the pad, with it finally taking flight at 3:21 p.m. -- an auspicious 3-2-1.

This was the company's 13th space station delivery for NASA. The Cygnus capsules get their name from the Swan Constellation.

This particular Cygnus has been christened the SS Robert H. Lawrence in honor of America's first black astronaut. Lawrence, an Air Force major, was chosen in 1967 as an astronaut for a classified military space program known as the Manned Orbiting Laboratory. He was killed five months later in a plane crash and never flew in space.

The space station is now home for Americans Jessica Meir and Andrew Morgan and Russian Oleg Skripochka. Morgan has been up there since July and the two others since September; they'll remain on board until April. Three other astronauts returned to Earth earlier this month.

Until astronaut launches resume from Florida -- possibly by SpaceX this spring -- the station crew will be limited in size to three. NASA astronauts now launch on Russian rockets from Kazakhstan.

Boeing, NASA's other commercial crew provider, is struggling with software problems in its astronaut capsule. A December test flight was marred by coding errors.