CHICAGO - After furious lobbying behind the scenes and a clash of the titans in public, a joint City Council committee agreed Monday to lift the Chicago ban on sports betting to allow sportsbooks in and around five stadiums.

The City Council’s Committee on Zoning and License advanced the stalled sports betting ordinance to the City Council floor after the addition of a clause without real teeth aimed at appeasing the Black Caucus.

The language articulates the city’s promise to "actively seek to achieve racial, ethnic, and geographic diversity when issuing primary sports licenses" and "encourage" minority and women-owned businesses to apply.

With those changes, the joint committee approved the mayor’s ordinance by a vote of 19 to 7.

Before the final vote, Cubs Chairman Tom Ricketts said his team is "ready to go today" on its $100 million partnership with DraftKings that will pave the way for Wrigley Field to house the first stadium sportsbook in Major League Baseball.

"With your approval of this ordinance, construction would begin immediately with the aim of opening a restaurant with a sportsbook in time for the 2023 season. This will create construction jobs and revenues now and permanent jobs in just over a year," Ricketts said.

Ricketts said the ordinance would "provide additional resources to the city’s professional sports teams that will help them compete."

"This is not a casino or even a mini-casino. It’s a sports bar-restaurant. … It only allows for fans who wish to place a wager to have a window to do so. I expect many fans will come to the sportsbook and never place a bet," he said.

"What is perplexing is that Neil Bluhm, who does not want our buildings to have sportsbooks, met with us on several occasions seeking to operate sportsbooks in our buildings. And that was long after the casino was approved for Chicago," Reinsdorf said.

"At that time, he had no assurance he would be chosen to operate a casino in Chicago and was not concerned that these books would, in any way, cannibalize whoever was chosen to operate the casino. It makes me wonder if he had gotten his way back then, would we be having this meeting today?" 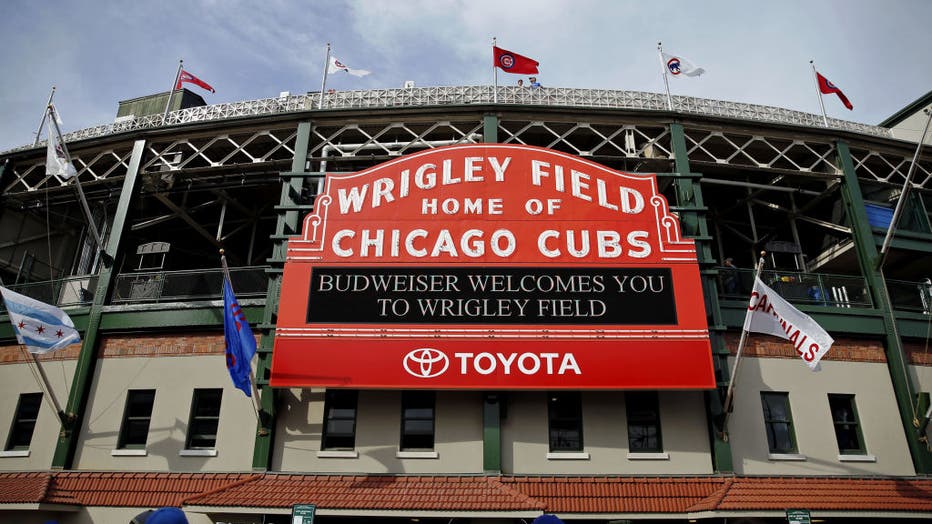 A general view of the Wrigley Field marquee outside of Wrigley Field before the game between the Chicago Cubs and the St. Louis Cardinals on June 4, 2017 in Chicago, Illinois. (Photo by Jon Durr/Getty Images)

Bluhm made no mention of that earlier meeting.

He simply reiterated his longstanding claim that what he calls the "five mini-casinos"— at Wrigley Field, Guaranteed Rate Field, Soldier Field, the United Center and Wintrust Arena — would "take visitors and money away" from a Chicago casino.

"The city could lose $10 million to $12 million per year and potentially make the new Chicago casino less successful if we are right," Bluhm said.

"Why take a chance like this? There’s a big risk with no reward. I urge you to vote no for this ordinance."

Mayor Lori Lightfoot all but acknowledged the minority set-aside clause has no teeth. But she argued that the city is precluded from going further.

"The state law doesn’t give us a lot of flexibility," she said.

Still, Lightfoot characterized the "commitment" made by sports moguls as "historic, given where they typically are," adding, "We’ll continue to work with them and push them to make sure that they make good on those promises."

The mayor’s promise was enough to satisfy some, but not all, joint committee members.

Nor was the study conducted for the city by Union Gaming Analytics that concluded, at worst, sports betting in and around five stadiums would cost a Chicago casino "no more than $4.3 million" and the city $843,000 in gaming taxes.

"Don’t vote for the banana in the tailpipe. This ordinance has not changed. We held it up last week because there was nothing in it [for minorities]. And there’s still nothing in it. So, don’t go for the Okie Dokie once again," said Far South Side Ald. Anthony Beale (9th), one of Lightfoot’s most outspoken City Council critics.

She remains concerned about the potential impact on casino revenues and about a 2% city tax on sports betting that she has said would yield "peanuts" for Chicago.

Ethics Committee Chair Michele Smith (43rd) noted that revenues from a Chicago casino will be used to shore up police and fire pension funds hovering dangerously close to insolvency.

"That means that, if anything cannibalizes it, people are gonna ask more of the property taxpayers," Smith said.

"So, I am very hesitant to approve this — certainly at this time. Maybe if it came up closer to when the casino opened that would be OK. But I’m very, very concerned about protecting our property taxpayers."