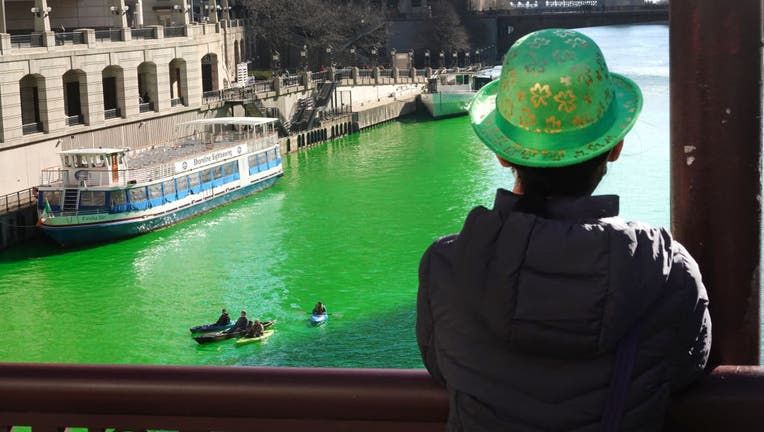 People view the Chicago River after it was dyed green in celebration of St. Patrick's Day on March 13, 2021 in Chicago. (Photo by Scott Olson/Getty Images)

CHICAGO - St. Patrick's Day festivities in Chicago will return to their former glory this weekend after two years of being hamstrung by a global pandemic.

Although temperatures are expected to linger in the low 20s, you can expect thousands to brave the arctic air to celebrate the first true St. Patrick's Day celebration since the onset of COVID.

Cases are decreasing across Chicago and Illinois, making this year's celebrations a far cry from the buttoned-up cautiousness of March 2021 when local bars were required to operate at 50 percent capacity with no dancing or gathering and face masks were required.

Although St. Patrick's Day is officially on March 17, Chicago annually celebrates the holiday en masse on the weekend prior.

When do they dye the Chicago River green?

Plumbers Local 130 will dye the Chicago River a brilliant emerald green at 10 a.m. Saturday west of Columbus Drive and east of Orleans Street.

The tradition dates back to 1962 and has been a fixture ever since.

The dye is harmless to wildlife and lasts for roughly five hours of selfie-snapping pleasure.

The dying was reported to be canceled in 2021 but the city switched it up at the last minute and dyed the river despite lacking the normal throng of spectators.

Surprise! The city reversed course and decided to dye the Chicago River green in 2021.

What time does the St. Patrick's Day parade start?

The downtown St. Patrick's Day parade begins at noon at the corner of Balbo and Columbus drives and will go north to Monroe Street.

Entry to the parade route opens at 10 a.m. at Jackson Avenue and Ida B. Wells Drive. This is the only entry point for parade spectators.

Among those in the parade will be the Shannon Rovers Irish Pipe Band, who have been leading the procession since 1956.

Security will check all bags and purses. Alcohol, open beverages and personal water bottles will not be allowed along the parade route.

Masks and vaccination cards will not be required to attend the parade.

Will the parade be canceled in case of bad weather? Glad you asked—as the event's website puts it: "Never! Snow, rain or arctic cold, the parade goes on."

When is the South Side Irish St. Patrick's Day parade?

After being canceled the past two years, shamrocks will abound at the 2022 South Side Irish Parade.

Expect dozens of floats, plenty of Irish music and dance and between 100,000 and 150,000 reveling in the return of one of the South Side's greatest traditions.

The parade will be held Sunday from noon to 3 p.m. at 103rd Street and Western Avenue, marching south to 115th Street.

After a two-year hiatus, the South Side Irish Parade is back.

The parade's website says it has "zero tolerance of any drunkenness or behavior that is not in line with our family values."

"This is a huge deal for my community," said Ald. Matt O'Shea (19th). "These past two years have been difficult for everyone, including missing the last two parades."

"It brings family, friends, neighbors and people from all walks of life to celebrate family, faith and heritage," said O'Shea. "We always joke out here that on parade day, everyone's Irish for one day."

Bailey O'Connell was named the South Side Irish Parade Queen.

Don't forget about the Northwest Side Irish Parade

The South Side isn't the only other community celebrating on Sunday.

The Northwest Side Irish Parade starts at noon at William J. Onahan School and proceeds south on Neola Avenue to Northwest Highway where it goes north to Harlem Avenue.

The parade has been going strong for 19 years.