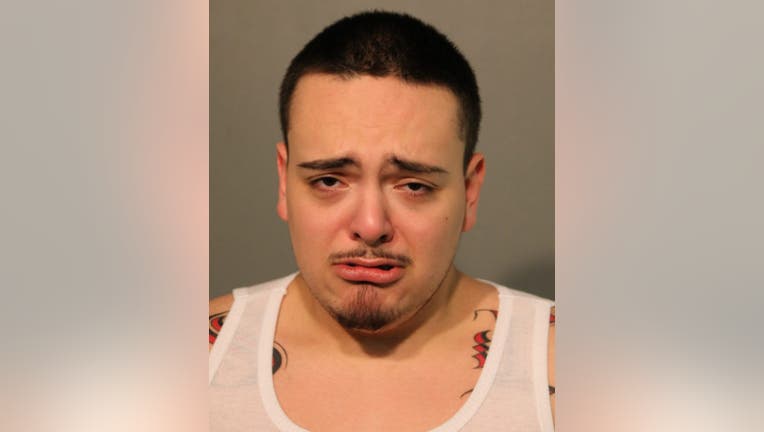 CHICAGO - Two men have been charged in connection with a shooting that killed a woman and man at an East Garfield Park convenience store.

Destiny Nunez, 23, and 18-year-old Adrian Navarro were killed following an altercation with the victims and one of the suspects on May 21, Cook County prosecutors said Friday.

Anthony Roldan, 18, has been charged with murder. His co-defendant, 20-year-old Justice Pierce, was charged with aggravated battery for his actions before Roldan started shooting, prosecutors said.

Roldan, then 17, and Pierce were waiting in line behind the victims when Roldan and Nunez began arguing at the liquor and food store in the 500 block of North Kedzie Avenue, prosecutors said. When Navarro went to pay, Pierce allegedly threw a bottle at him and began to punch him repeatedly.

Nunez tried to break the fight up, but Roldan pulled out a handgun and started firing, prosecutors said.

Nunez was able to run outside. Roldan allegedly held Navarro by the shirt until Navarro also was able to break free and run into the parking lot outside.

A store clerk heard Roldan threaten to "smoke" Nunez and Navarro, before he stepped outside of the business and fired several more shots at the pair, striking them both, prosecutors said.

Nunez fell in the parking lot but Navarro continued to run, prosecutors said. Navarro was eventually taken to a hospital for injuries but died like Nunez.

The shooting was captured on surveillance cameras and police were able to track down the car that Roldan and Pierce fled in using POD cameras and license plate readers, which showed that the car was registered to an address that Pierce had once used as a home address, prosecutors said.

Both men were in the vehicle during a traffic stop in July that was recorded by the officer’s body-worn cameras, prosecutors said.

Multiple police officers identified Roldan and Pierce from prior encounters after viewing the surveillance footage of the shooting, prosecutors said.

Roldan was "attacked" by Nunez, who was holding a broken bottle, before he fired a shot, a defense attorney said, citing the video evidence.

Pierce is in a program to become an electrician and turned himself in to police when he learned he was wanted, the defense attorney added.

Pierce has a pending aggravated unlawful use of a weapon charge case, prosecutors said.

Judge Mary Marubio noted that Roldan had a gun he was legally not allowed to possess at the time of the shooting. Roldan also said he was going to "smoke" the victims and didn’t appear to be defending himself, the judge also pointed out.

Both men are expected back in court Feb. 9.