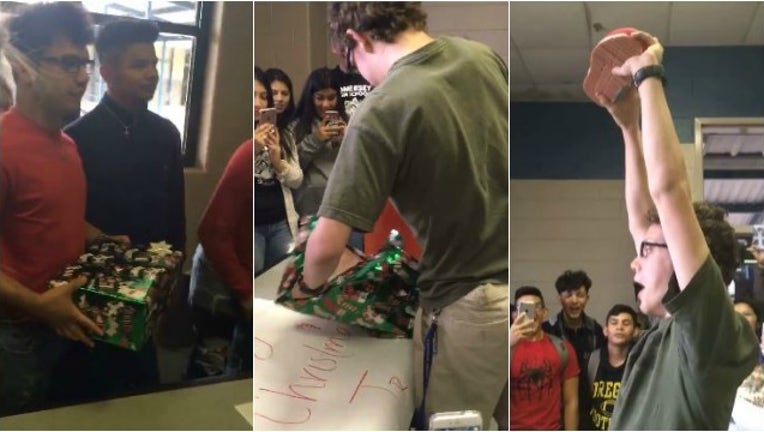 An act of kindness at a Texas high school has gone viral and is touching the hearts of thousands.

Word spread that he had been wearing shoes that were too small, so his classmates decided to help him out. They raised money and surprised him at school last Friday with two brand new pairs of sneakers.

Somerset ISD shared a video on Facebook of JR receiving his gifts, and his reaction was priceless.

"We got you some Christmas gifts," one student told JR. "Everybody helped us donate."

JR opened the presents and his classmates cheered as he held his shoes up in the air.

Turns out, according to the school system, JR had been wearing the size 10 shoes because they belonged to his beloved grandfather, who could no longer wear them.

"We found out from JR's family that he does have shoes that fit him, but he refuses to stop wearing the boots," Somerset ISD said. "JR was wearing the boots the day he told the boys that he really needed a size 13."

The school described the act of kindness as "the magic of Christmas." The video has been shared more than 89,000 times and has more than 113,000 likes.

DON'T MISS: Woman delays her flight to help man with autism at airport