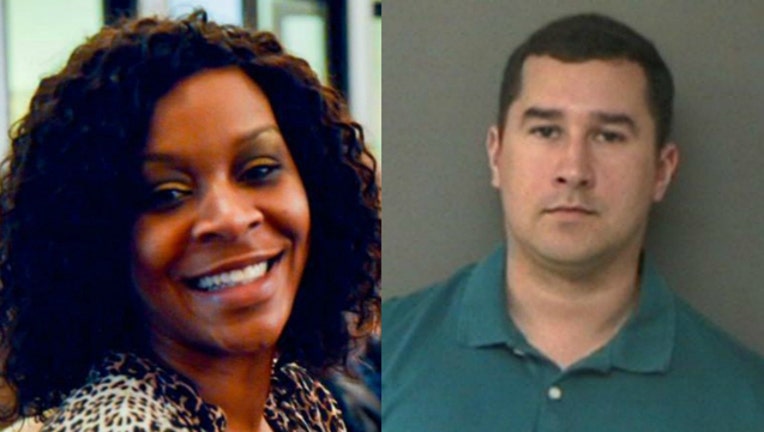 AUSTIN, Texas (AP) — A Texas trooper indicted over his arrest of a black woman who was later found dead in jail has been formally fired, three months after his bosses first announced they would do so, state officials said Wednesday.

Former Texas Department of Public Safety Trooper Brian Encinia can still appeal the decision to fire him, which came after a grand jury indicted him on a perjury charge in December. He is accused of lying about his July 2015 arrest of Sandra Bland and their confrontational traffic stop that was caught on dashcam video.

Encinia met last month with Department of Public Safety Director Steve McCraw, but their conversation gave the agency leader no reason "to alter my preliminary decision," according to a termination letter signed by Encinia on Wednesday.

Encinia's attorney, Larkin Eakin, did not immediately return a phone message. He has previously called the indictment unjustified and said Encinia was looking out for his own safety.

Bland's family sued after the 28-year-old black woman died last summer in jail following her arrest on the outskirts of Houston. Her death was ruled a suicide. The case provoked national outrage and drew the attention of the Black Lives Matter movement, with protesters linking Bland to other black suspects who died in confrontations with police or while in police custody.

Encinia had been on paid desk duty since Bland's arrest and remained on the payroll after McCraw announced in December that the agency would begin the process of firing him. He is now no longer a paid employee and will remain that way even if he appeals his dismissal to the state's Public Safety Commission, Department of Public Safety spokesman Tom Vinger said.

Dashcam video from Encinia's patrol car shows the traffic stop quickly became confrontational. The video shows the trooper drawing his stun gun telling Bland, "I will light you up!" after Bland refuses to get out of her car. Bland eventually steps out of the vehicle, and Encinia orders her to the side of the road. The confrontation continues off-camera but is still audible.

Bland was arrested for assault and taken to the Waller County jail. Three days later, she was found hanging from a jail cell partition with a plastic garbage bag around her neck.

Bland's family has said they were working to get about $500 for her bail when they learned of her death.

A grand jury last month tied its perjury indictment of Encinia to his statement in an affidavit where he said Bland was "combative and uncooperative" after he stopped her and that he removed her from her car to further conduct a safer traffic investigation.