Car kebab recreated at Paisans Pizzeria and Bar in Berwyn

Pete Gamen’s 23-foot-tall sculpture, in the parking lot of Paisans Pizzeria and Bar in Berwyn, is made from fiberglass go-kart bodies.

And now, Berwyn artist Pete Gamen has re-created one of the Chicago region’s great pieces of lost public art: Spindle, better known as "the Car Kebab."

And like the Niles tower, it’s about half as tall as the original — a spike impaling eight full-size cars that rose from a sea of tarmac in Berwyn’s Cermak Plaza shopping center until it was torn down in 2008 to make way for a Walgreens.

"Everyone loves a re-creation because it was gone and they want to remember it, whether they liked it when it was there or not," Gamen said this week, just a few days after the official unveiling, also in Berwyn. "This one is more vibrant. There are not the pigeons sitting on it."

The original Spindle’s detractors pointed to the accumulation of bird doo-doo on the rusting automobiles. Predictably, some said it wasn’t art — that it was just a bunch of cars stuck on a spike.

But it became a worldwide kitsch icon after the 1992 release of "Wayne’s World," which features Wayne, Garth and friends in a sky blue AMC Pacer passing various landmarks, including the Spindle, as they headbang to Queen’s "Bohemian Rhapsody."

Just before the Spindle’s demolition, there was a series of Save the Spindle demonstrations.

"I always knew it was a possibility after a 10-year grace period that it could be destroyed because it’s a commercial shopping center," Spindle creator Dustin Shuler said in a 2007 interview on NPR. "It would have been a lot easier for me if people hadn’t fallen in love with it." 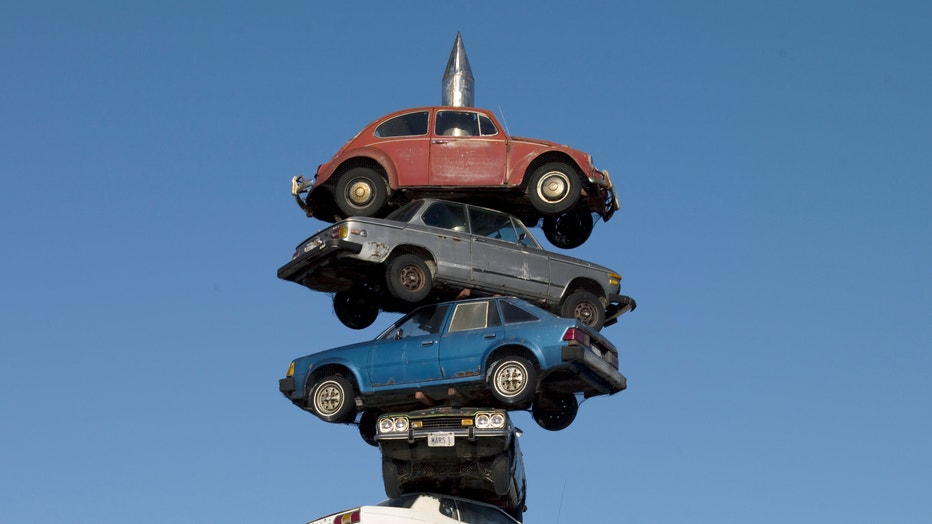 Gamen’s 23-foot-tall sculpture, in the parking lot of Paisans Pizzeria and Bar in Berwyn, is made from fiberglass go-kart bodies — all sealed up so that no critters can crawl inside, he said. And, he pointed out, fiberglass doesn’t rust.

Gamen said he and the Berwyn Development Corp. came up with the idea for a new Spindle in celebration of the upcoming 100th anniversary of U.S. Route 66.

"We’re getting a lot of positive response — people coming out and taking pictures with and posting them on social media," said Rob Pesci, Paisans’ director of operations.