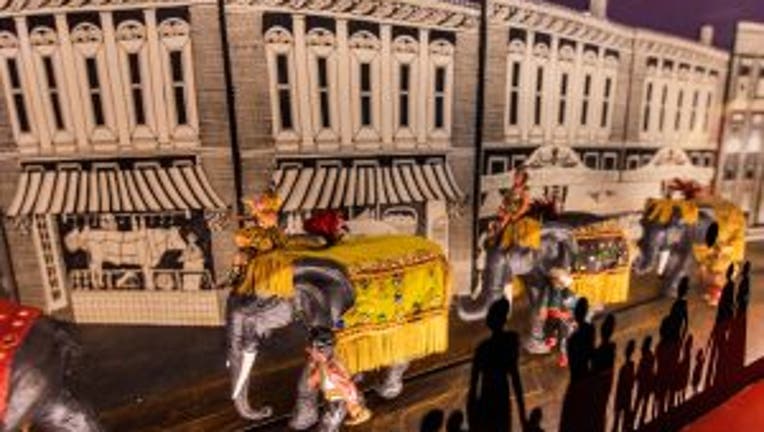 CHICAGO - A child would step into a world bathed in crimson light. She’d hear the hiss and toot of a steam whistle organ.

The tease of the circus announcer: "You’ll see Jolly Marge, the heaviest human being alive! … And Tiny Timothy, the smallest man on Earth!"

And then she’d spy, at her own eye level, the golden lights in the big top and tiny, rickety figures dangling far above the safety net. Perhaps she’d dream of one day becoming a trapeze artist.

For the better part of five decades, thousands of children — and grownups, too — experienced the thrill of the circus while strolling through an exhibit on the art form at the Museum of Science and Industry.

The MSI’s circus exhibit folds its tent after 5 decades

For the better part of five decades, thousands of children — and grownups, too — experienced the thrill of the circus while strolling through an exhibit on the art form at the Museum of Science and Industry.

For many it was magical, for others, like a nightmare scene from a bad horror flick. But for all, it is now just a memory. The remaining two dozen or so items — including 10 hand-made dioramas with mechanical moving figures — were removed earlier this month to make way for a new exhibit.

Traditional circuses, like rotary phones and drive-in movies, don’t have the same appeal they once did.

"We want to always be relevant to our audience," said Kathleen McCarthy, the museum’s director of collections and head curator. "Science and technology is a field that really advances quickly. So this content is nostalgic. While really enjoyable and entertaining, we just thought we needed the space to introduce new content."

So the museum’s collection is going on the auction block, along with hundreds of other circus-related items from across the globe; among them is a toolbox belonging to Karl Wallenda, the famed high-wire walker who fell to his death in 1978. On the inside of the lid, it reads: "Tell me if any tools are broken or missing. Your life depends on it." There are also countless circus posters and photographs of sideshow entertainers, including Francesco Lentini, "the three-legged Italian wonder."

The auction is set for Sept. 24 at Potter & Potter Auctions at potterauctions.com.

But the science museum’s collection is unique among the other items on auction because it wasn’t culled from a real circus. The miniature figures in the dioramas and eight smaller vignettes were built, beginning in the 1920s, by Roland Weber, a Chicago railroad worker.

Aside from the trapeze artists and lion tamers, there are also intimate, everyday circus life scenes, including a vignette of workers reading while sitting on the toilet.

Little is known about Weber, McCarthy said, but his work was clearly "a labor of love."

Weber began building toward the end of the so-called Golden Age of the circus, which ran from 1872 to 1929, when the Great Depression hit.

Trains 60 or 70 cars long hauling trapeze artists, horses, elephants, zebras, polar bears, snaked through towns before the circus would set up for performances.

"It was literally a city of tents" when it arrived, said Pete Shrake, the archivist at Circus World Museum in Baraboo, Wisconsin.

Little towns would all but shut down when the circus came.

Weber’s miniatures captured that excitement, and the Museum of Science and Industry, when it first put his work on display, recreated it. The dioramas were set up in the early 1970s beneath the East Pavilion rotunda. A circus film projected onto a vertical screen.

"They wanted it to feel like you were in a big top," McCarthy said.

With a little imagination, you might even smell the elephant poop and an assortment of deep-fried goodies.

‘It evokes a passion’

In the early 1990s, the exhibit — now much smaller — was moved to its most recent location. For some visitors, it felt out of place — almost an afterthought. Kids hurried through on their way to the dazzling U-505 exhibit.

But just because the circus exhibit is no more, it doesn’t mean the art form is extinct.

Circuses are smaller. They mostly travel by truck. They struggled during the pandemic, Shrake said.

"It’s an art form that evolves and changes. And when you see it, it evokes a passion," he said. "I challenge anybody to go to a circus and not become enthralled with the art form that it is."