White House Press Secretary said March 5 that senior members of Biden's team will travel to the border region so they can give him a full briefing on the influx of unaccompanied minors.

WASHINGTON - Former President Donald Trump on Friday weighed in on President Joe Biden's immigration policies amid an influx of migrants at the border since his victory, calling the situation a "spiraling tsunami." The Biden administration in response called Trump's policies while in office "not only inhumane but ineffective," saying it sought to chart its own path forward with "humanity and respect."

"Our border is now totally out of control thanks to the disastrous leadership of Joe Biden," Trump said in a lengthy statement. "Our great Border Patrol and ICE agents have been disrespected, demeaned, and mocked by the Biden Administration. A mass incursion into the country by people who should not be here is happening on an hourly basis, getting worse by the minute."

Since taking office, Biden has been working to reset the U.S.-Mexico relationship while facing a flood of migrants who have rushed to the border since his election in November.

In his statement, Trump described the situation at the border as a "spiraling tsunami" that is "overwhelming local communities, depleting budgets, crowding hospitals, and taking jobs from legal American workers."

The Biden administration has repeatedly vowed to replace the "cruelty" of the Trump administration with an "orderly, humane and safe immigration process. In response to Trump’s statement, Biden’s press secretary Jen Psaki on Friday said the White House would chart its own path forward by ensuring the safety of children.

"We don’t take our advice or counsel from former President Trump on immigration policy, which was not only inhumane but ineffective over the last four years," Psaki said during a briefing.

"We’re going to chart our own path forward, and that includes treating children with humanity and respect, and ensuring they’re safe when they cross our borders," she added. 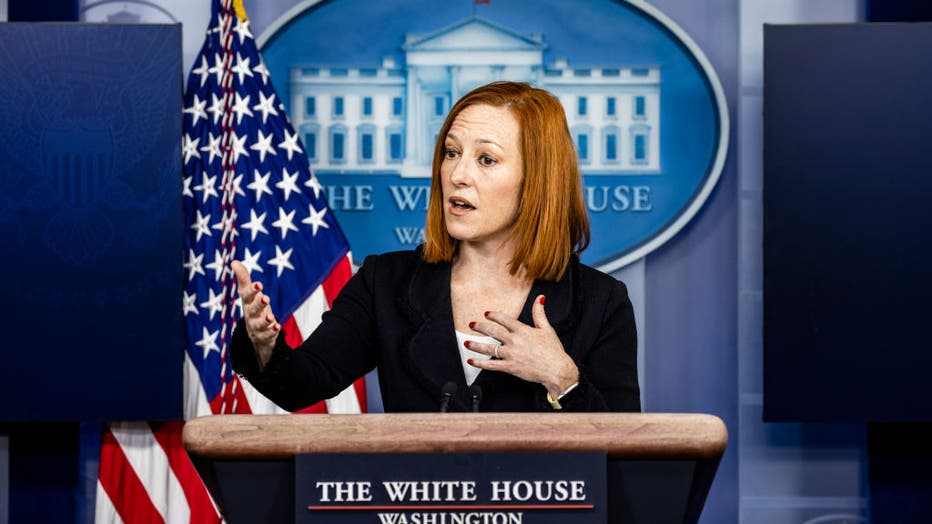 Trump, whose administration took measures to restrict both legal and illegal immigration, early on directed ICE to apprehend anyone who was in the country illegally — regardless of criminal history or community ties.

The Trump administration faced criticism and protests over its "zero tolerance" policy and resulting separation of children from their parents.

Under Biden, immigration enforcement in the U.S. has reverted to a more targeted approach, focusing on people in the country illegally who pose a threat to national security, people who committed crimes designated as "aggravated" felonies, or people who recently crossed the border.

Biden has backed a bill to give legal status and a path to citizenship to the estimated 11 million people living in the country illegally. Biden also broke from Trump’s policies by supporting efforts to allow hundreds of thousands of people who came to the U.S. illegally as young children to remain in the country.

Currently, U.S. Border Patrol agents are apprehending an average of more than 200 children crossing the border without a parent per day, but nearly all 7,100 beds for immigrant children maintained by the Department of Health and Human Services are full.

Homeland Security Secretary Alejandro Mayorkas on Monday sought to push back against the notion that the situation at the border was spinning out of control.

"The men and women of the Department of Homeland Security are working around the clock seven days a week to ensure that we do not have a crisis at the border, that we manage the challenge as acute as the challenge is, and they are not doing that alone," Mayorkas said.

After taking office, Biden also stopped the construction of the border wall that Trump campaigned heavily on in the 2016 election. In his statement, the former president said completion of the wall "will save thousands of lives."

Trump had said the border wall would be "virtually impenetrable" and paid for by Mexico during this 2016 campaign, which never happened. While sections of the wall, which remain incomplete, are more formidable than the barriers it replaced, it isn’t uncommon for smugglers to guide people over or through it.

Mexico's president had said he intends during the meeting to propose to Biden a new immigrant labor program that could bring 600,000 to 800,000 Mexican and Central American immigrants a year to work legally in the United States.

On Monday, Biden met virtually with Mexican President Andrés Manuel López Obrador to discuss immigration and the coronavirus pandemic, among other issues.

"We haven’t been perfect neighbors to each other," Biden acknowledged in brief remarks at the start of his video conference meeting with the Mexican president.

López Obrador, for his part, told Biden that he was thankful that the new president was "willing to maintain good relations for the good of our people in North America."