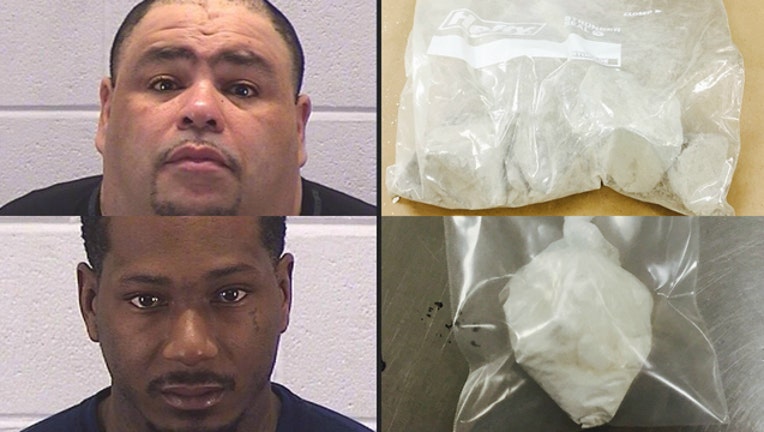 SUN-TIMES MEDIA WIRE - Two traffic stops in the past week by Aurora police resulted in the seizure of heroin, cocaine and marijuana valued at over $53,000.

At 7:45 a.m. Tuesday, a Jeep Cheorkee driven by 28-year-old Ado D. Autman was stopped after pulling out in front of police at the corner of Fox Pointe and Mair drives, according to Aurora police.

Officers learned that he was driving with a revoked license and did not have proof of insurance. After his arrest, officers found a backpack inside the car with 300 grams of heroin, 100 grams of cocaine, a pound of cannabis and $1,885 in cash, police said.

Police estimate the street value of the drugs to be around $50,000.

Just after 11 p.m. Saturday, officers stopped a 1997 Ford Expedition near State Street and Fourth Avenue that failed to use turn signals, police said.

When officers walked up to the car they saw an open beer in the back seat. A passenger, Steve A. Suarez, 40, pulled out his identification and a bag of cocaine fell out of his jacket pocket, police said. The bag contained about 29 grams of cocaine, a street value of $3,000. Officers also seized $421 in cash.

Suarez, of the 600 block of Woodlawn, was already on parole for drug charges, so a new arrest warrant was issued stemming from his most recent felonies, police said. He is being held on a $150,000 bond at the Kane County Correctional Center in St. Charles.

The man driving was ticketed for failure to signal and verbally warned about a loud exhaust, police said. A man in the back seat was charged with illegal transportation of alcohol after a beer was found in one of his jacket pockets. There was a fourth passenger who was not charged.