President Joe Biden is temporarily targeting PPP loans to help the nation's smallest businesses and ventures owned by women and people of color.

WASHINGTON (AP) - The number of Americans seeking unemployment benefits fell sharply last week in a sign that layoffs may have eased, though applications for aid remain at a historically high level.

Jobless claims declined by 111,000 from the previous week to a seasonally adjusted 730,000, the Labor Department said Thursday. It is the lowest figure since late November and the sharpest one-week decline since August. Still, before the virus erupted in the United States last March, weekly applications for unemployment benefits had never topped 700,000.

The latest figures coincide with a weakened job market that has made scant progress in the past three months. Hiring averaged just 29,000 a month from November through January. Though the unemployment rate was 6.3% in January, a broader measure that includes people who have given up on their job searches is closer to 10%.

All told, 19 million people were receiving unemployment aid as of Feb. 6, up from 18.3 million the previous week. About three-quarters of those recipients are receiving checks from federal benefit programs, including programs that provide jobless aid beyond the 26 weeks given by most states.

Last week's drop in applications was concentrated in two states, California and Ohio, where they fell by a combined 96,000. Ohio officials had said earlier this month that a surge in new applications was driven in part by a jump in potentially fraudulent claims. That now appears to have faded.

California's system operates on a biweekly bases, which can make its weekly data choppy.

This month's devastating winter storms and power outages in Texas and some neighboring states might have also disrupted the filing or processing of some claims. Applications for jobless aid fell by one-sixth in Texas to about 35,000.

Yet last week's decline in applications was broad-based, with 36 states and the District of Columbia reporting fewer people seeking unemployment benefits. That suggests that employers might be cutting fewer jobs. 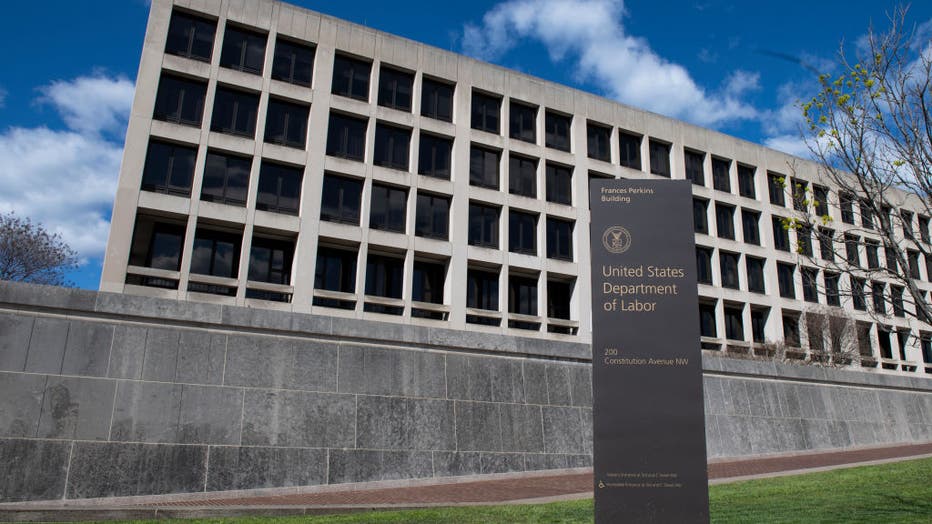 The U.S. Department of Labor building is pictured in Washington on Thursday, April 2, 2020. (Photo by Caroline Brehman/CQ-Roll Call, Inc via Getty Images)

Still, she cautioned, "the data continue to suffer from noise related to issues of backlogs and fraud. We expect a more sustainable labor market recovery to take hold closer to mid-year with broader vaccine distribution and the arrival of more fiscal support."

In the meantime, economists say, widespread business shutdowns in states hit by the ice storms could cause an increase in applications for jobless aid in coming weeks.

Despite the weakened job market, key sectors of the economy are showing signs of picking up as vaccinations increase and government rescue aid works its way through the economy. The Federal Reserve's ultra-low-rate policy is providing important support as well.

Retail sales soared last month as many Americans spent the $600 checks that were included in a relief package enacted in December. Factory output also rose and has nearly regained its pre-pandemic levels. And sales of newly-built homes soared last month.

Michelle Meyer, an economist at Bank of America, on Monday upgraded her forecast for growth this year to 6.5%, which would be the fastest since 1984. Daily coronavirus infections are down more than 70% from their peak, Meyer noted, which should lead to more states and cities relaxing business restrictions.

The Fed has pegged its short-term interest rate near zero to encourage more borrowing and spending. Chair Jerome Powell stressed in testimony to Congress this week that the Fed plans to keep its rate ultra-low until the job market has recovered – even if inflation has begun to surpass the Fed’s 2% target level by then. That soothed the stock market, which had fallen in the past week on fears that rising interest rates and the threat of inflation might lead the Fed to raise rates too quickly and potentially derail the economy.

The yield on the 10-year Treasury note has risen sharply in anticipation of more robust economic growth and is now 1.45%. At the start of the year, the 10-year yield was below 1%.

In his testimony this week, Powell downplayed the inflation risk and instead underscored the economy’s struggles, including the 10 million jobs that remain lost since the pandemic erupted nearly a year ago. That’s a deeper job loss than was inflicted by the Great Recession of 2008-2009.

But on Wednesday, Richard Clarida, a Fed vice chair, sounded a more optimistic note in remarks to the U.S. Chamber of Commerce. Clarida pointed to the distribution of vaccines and the economic relief package that the government enacted late last year as reasons for a sunnier outlook.

"The prospects for the economy in 2021 and beyond," Clarida said, "have brightened, and the downside risk to the outlook has diminished."

Even the ice storms and widespread power outages in Texas, damaging as they were to residents and businesses there, are unlikely to inflict a major blow on the overall U.S. economy, according to Oxford Economics.

Oren Klachkin, lead U.S. economist at Oxford, estimates that the harsh winter weather will slightly lower growth in the January-March quarter to a still-blistering 6.8% annual rate, down from a previous estimate of 7.1%.