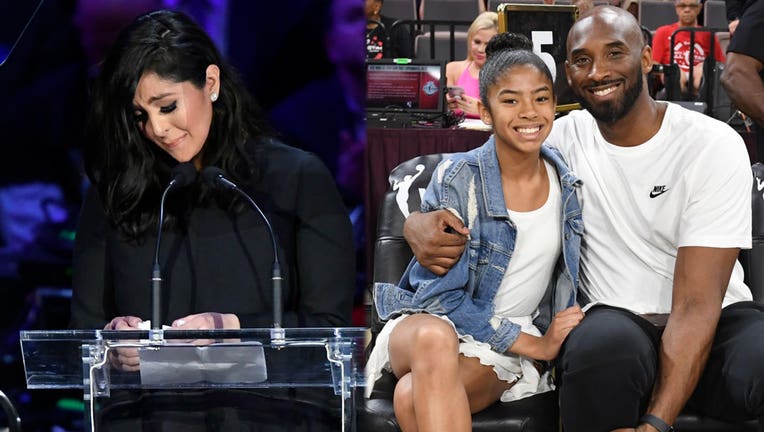 Vanessa Bryant speaks during The Celebration of Life for Kobe & Gianna Bryant at Staples Center on Feb. 24, 2020 in Los Angeles, California, alongside Gianna Bryant and her father, former NBA player Kobe Bryant, at the WNBA All-Star Game 2019 at

LOS ANGELES - A year after a helicopter crash took the life of her husband, NBA legend Kobe Bryant, their 13-year-old daughter, Gianna, and seven other people, Vanessa Bryant shared a touching letter she received and confessed she "will never understand" the tragedy that took their lives.

Vanessa Bryant posted a letter on Instagram that was sent to her from one of Gianna’s best friends, Aubrey.

"Thank you so much for beautifully sharing some of your memories of my Gigi with me and allowing me to share them here on my ig," Bryant wrote in the caption.

"I will never understand why/how this tragedy could’ve happened to such beautiful, kind and amazing human beings. It still doesn’t seem real. Kob, we did it right. Gigi, you still make mommy proud. I love you," she added.

In the letter, Aubrey praised the life and spirit of her late friend, and noted that "if I ever become mom, I hope my daughter turns out exactly as yours did." She wrote that Gianna’s "love of life" was something she admired, and admitted that Gianna had boosted her confidence enough to play basketball.

"Kind, caring and endlessly polite," her friend wrote that Gianna was also "fiery and stubborn, she knew what she wanted and fought to get it."

"I hope that in the midst of your intense sadness you catch a glimpse of joy in who the daughter you created and raised was," the letter reads. "You did it right Mrs. Bryant, and we are all eternally grateful to you."

Gianna, her father, and seven others were flying on the morning of Jan. 26, 2020 to a girls basketball tournament at Kobe Bryant’s Mamba Sports Academy. Kobe Bryant had coached Gianna’s team, which was scheduled to play that afternoon.

The helicopter crashed into a hillside in Calabasas, killing all aboard. The victims included two of Gianna’s teammates.

In anticipation of the one-year anniversary of the crash, Vanessa Bryant asked media to not air photos of the wreckage.

"We ask that you do not air photos of the wreckage, helicopter in the air or accident scene," Vanessa wrote in a statement on Instagram. "We do NOT want to see it. Our year has been traumatic enough."

"We hope that videos of remembrance are done in a classy and tasteful manner that is respectful of all of our losses," she added.

RELATED: 'He was like Hercules to me': Girl, 12, wants to continue Kobe and Gianna Bryant's legacy