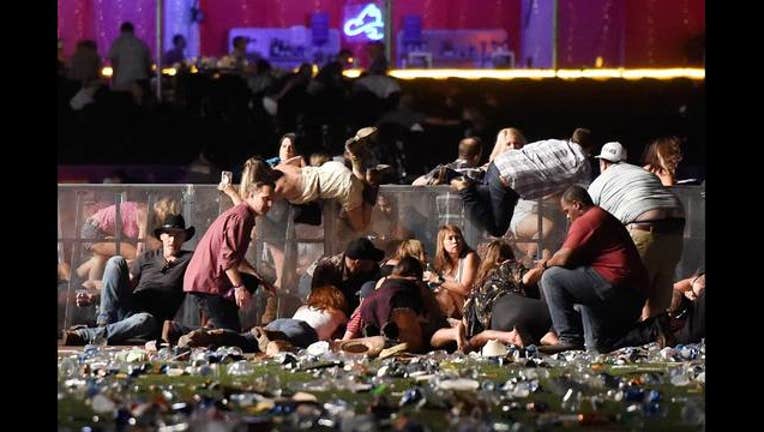 In private cars, in ambulances waiting four or five deep, from the walking wounded to the barely alive, they arrived in droves.

"I have no idea who I operated on," said Dr. Jay Coates, a trauma surgeon whose hospital took in many of the wounded after a gunman opened fire from a Las Vegas hotel window on a country concert below. "They were coming in so fast, we were taking care of bodies. We were just trying to keep people from dying."

As Sunday night led to Monday morning, the attack became the deadliest mass shooting in modern U.S. history with 59 killed and 527 wounded.

University Medical Center of Southern Nevada was one of many hospitals that were overflowing.

"Every bed was full," Coates said. "We had people in the hallways, people outside and more people coming in."

He said the huge, horrifying wounds on his operating table that told him it wasn't just the massive numbers that made this shooting different.

"It was very clear that the first patient I took back and operated on that this was a high-powered weapon," Coates said. "This wasn't a normal street weapon. This was something that did a lot of damage when it entered the body cavity," Coates said.

He had seen similar wounds before but "of course never this many patients," he said.

He had 23 guns - some with scopes - in the room at the Mandalay Bay Hotel and Casino where he had been staying since Thursday. He knocked out two windows to create sniper's perches he used to rain torrents of bullets on the crowd of 22,000 some 500 yards away, authorities said.

Two guns were modified to make them fully automatic, according to two U.S. officials briefed by law enforcement who spoke on condition of anonymity because the investigation is still unfolding.

At Paddock's home, authorities found 19 more guns, explosives and thousands of rounds of ammunition. Also, several pounds of ammonium nitrate, a fertilizer that can be turned into explosives, were in his car, authorities said.

Authorities believe Paddock acted alone. While he appeared to have no criminal history, his father was a bank robber who was on the FBI's most-wanted list in the 1960s.

"I can't even make something up," his brother in Florida, Eric Paddock, said when asked what might have motivated his brother. "There's just nothing."

Authorities also had nothing to say about Paddock's motive.

"I can't get into the mind of a psychopath at this point," Sheriff Joseph Lombardo said.

At the concert, headliner Jason Aldean had just started his set shortly after 10 p.m. to close out the three-day Route 91 Harvest Festival when bullets started hitting people.

In the crowd there was gunfire, but no gunman. Some figured out where it was coming from through the cracks and muzzle flashes.

Paddock appeared to fire unhindered for more than 10 minutes, according to radio traffic, as police frantically tried to locate him.

"We can't worry about the victims," an officer said on radio at 10:15 p.m. "We need to stop the shooter before we have more victims. Anybody have eyes on him ... stop the shooter."

The crowd, funneled tightly into a wide-open space, had little cover and no easy way to escape. Victims fell to the ground, while others fled in panic. Some hid behind concession stands or crawled under parked cars.

Faces were etched with shock and confusion, and people wept and wailed. Some of the injured were hit by shrapnel. Others were trampled or were injured jumping fences.

"It was chaos - people just running for their lives. People trying to get down. Trying to get to their loved ones that had gotten hit," said Shaun Topper. "It was just, you know. It was chaos."

Marie Langer, 16, of Las Vegas, got to the concert early so she could get to the very front of the venue, closest to the stage.

That meant she and her friends were among the last to get out, and could hear shots ringing and people screaming the entire time she was trying to flee. She finally had to climb a fence with points on the top of metal bars designed to prevent people from getting over it.

"We had no other option," she said.

Tales of heroism and compassion emerged quickly: One man grasped the hand of a dying stranger as the man died, unable to pull himself away despite the danger. Another borrowed a flannel shirt from a man he didn't know to create a tourniquet for a girl he didn't know.

Couples held hands as they ran. The healthy carried the bleeding off the grounds. Strangers drove victims to hospitals in their own cars.

Bodies covered in white sheets were still being removed from the festival grounds more than 12 hours after the massacre, and the scene was covered with the abandoned bags and belongings of those who fled.

Coates, the trauma surgeon, said it was not for lack of preparation that lives were lost, though with smaller numbers they might have saved more.

"I will tell you that everybody that should have lived, lived," Coates said. "The ones that we lost, I think if they had been the only patients coming through the door that we would have been able to save them."

Authorities put out a call for blood donations and set up a hotline to report missing people and speed the identification of the dead and wounded. They also opened a "family reunification center" for people to find loved ones.

Before Sunday, the deadliest mass shooting in modern U.S. history took place in June 2016, when a gunman who professed support for Muslim extremist groups opened fire at a gay nightclub in Orlando, Florida, killing 49 people. Historically, the United States has had a number of mass shootings surpassing Sunday's attack. For example, more than 100 black people were gunned down during a mass shooting in Colfax, Louisiana, in 1873.