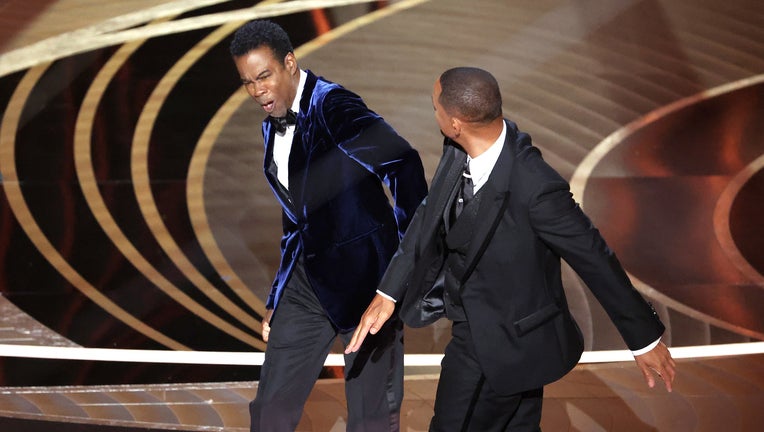 HOLLYWOOD, CA - March 27, 2022. Chris Rock and Will Smith onstage during the show at the 94th Academy Awards at the Dolby Theatre at Ovation Hollywood on Sunday, March 27, 2022. (Myung Chun / Los Angeles Times via Getty Images)

HOLLYWOOD - Will Smith slapped Chris Rock during the Academy Awards Oscar show. The question is: Was it real or was that scripted?

Social media burst into flames on Sunday night after Will Smith marched on to stage, slapped Chris Rock hard in the face, and walked off.

Uncensored versions of the broadcast seem to show Will Smith saying to Chris Rock: "Keep my wife’s name out of your f****** mouth!"

Rock had just made a joke about Will Smith's wife, Jada Pinkett Smith, and her bald head. She has a condition called alopecia, which leads to hair loss.

Within the next hour, Will Smith won the Best Actor Oscar for his portrayal of Richard Williams, father of tennis stars Serena Williams and Venus Williams, in the movie "King Richard."

"Richard Williams was a fierce defender of his family," Smith said in his acceptance speech. He went on to talk about protecting the girls who played Venus and Serena. "I am being called on in my life to love people and to protect people… I know we do what we do, you gotta be able to take abuse and have people talk crazy about you. You gotta smile and pretend like that's okay."

Smith went on to talk about the intervention he'd just gotten from actor Denzel Washington.

"Denzel said to me a few minutes ago: ‘At your highest moment, be careful, that’s when the devil comes for you," Smith said.

Ultimately, Smith apologized to the academy and to his fellow nominees.

"Art imitates life. I look like the crazy father" said Smith. "But love will make you do crazy things."