Officer Fernanda Ballesteros, who was shot last week during a traffic stop in Englewood, was released from the hospital on Monday.

CHICAGO - A Chicago police officer who was shot and seriously wounded in West Englewood last week is out of the hospital.

Chicago Police Officer Fernanda Ballesteros was released from the hospital Monday, after suffering a gunshot wound to the head Wednesday.

Hundreds of police officers lined up in the rain outside University of Chicago Medicine to salute Ballesteros as she was wheeled out of the facility. A mariachi band also serenaded her.

Ballesteros, 27, was in the intensive care unit and seeing her become well enough to be discharged, was uplifting to all who witnessed it.

Before she was released, Ballesteros recorded a video message from her hospital bed, thanking hospital staff and her fellow officers for their support in the days since she was wounded.

Chicago officer Fernanda Ballesteros released a video message from her hospital bed Monday thanking fellow officers for the support in the days since she was shot during a traffic stop in Englewood last week.

"The events of last week and yesterday demonstrate the danger each of us officers put themselves in every day and demonstrates how quickly an officer's normal day can change into something catastrophic. It shows in the blink of an eye, an officer's life is forever altered," Ballesteros said.

Ballesteros also said in the statement that she chooses to focus on the positive in her experience of being shot.

"I am choosing to see the light in this dark time and I will grow stronger both physically and mentally from this tragedy."

Ballesteros was conducting a traffic stop Wednesday evening in Englewood when she was fired on. Officers returned fire, critically wounding the suspect who was taken to Advocate Christ Hospital. 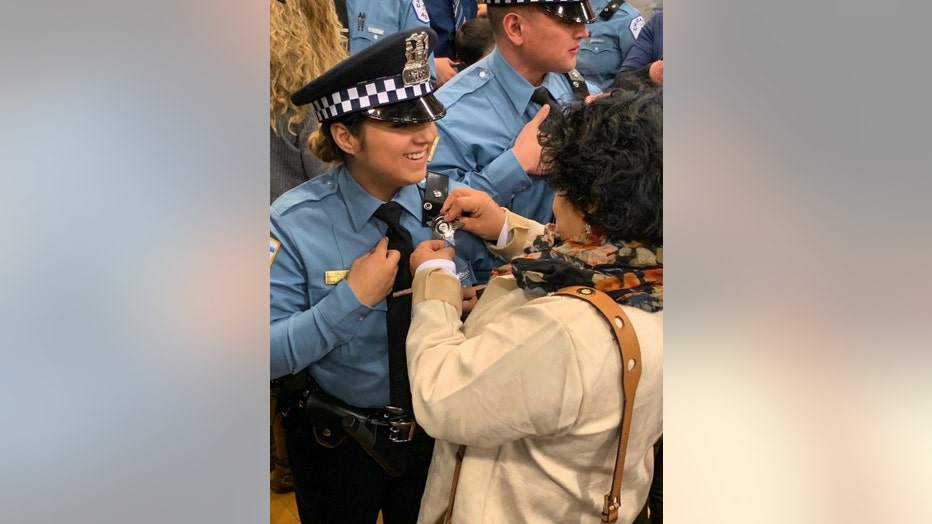 Officer Fernanda Ballesteros in an undated photo from family. (Courtesy of UChicago Medicine)

Ballesteros’ partner drove her straight to the hospital. In her recorded statement, she thanked her partner and everyone who reached out to her family in support.

"Thank you to Officer Young, my partner who had my back and carried me to safety. I’m forever grateful for his quick thinking and swift response. You were my guardian angel that night," Ballesteros said. "This week has shown me and my family the true brotherhood of the Chicago Police Department and the brotherhood extends beyond me to caring and protecting my family as well."

In a touching moment, Ballesteros rose from her wheelchair to hug Officer Carlos Yanez, who also was shot in the line of duty. He suffered a wound to the head in August 2021 and his partner, Ella French, was killed.

Ballesteros encouraged another CPD officer shot on Sunday during a shootout in Englewood.

"To my fellow Brother Blue who was recently injured in the line of duty: Don’t ever feel alone because you have a whole line of support from the Blue family that wishes you a speedy recovery," she said.