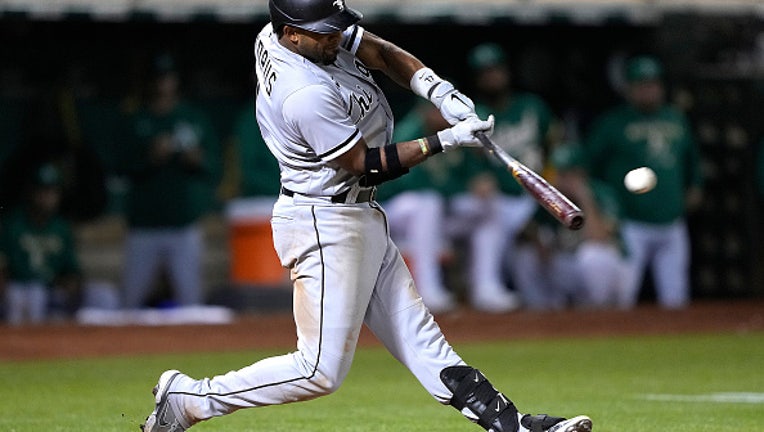 OAKLAND, CALIFORNIA - SEPTEMBER 09: Elvis Andrus #1 of the Chicago White Sox hits a two-run RBI double against the Oakland Athletics in the top of the ninth inning at RingCentral Coliseum on September 09, 2022 in Oakland, California. (Photo by Thearo

OAKLAND, Calif. - The Chicago White Sox have done some yelling. They’ve tried out plenty of good-natured teasing. They’ve had heart-to-hearts.

After a rough start this season, things are suddenly clicking in September when it matters most for the reigning AL Central champions as Chicago tries to win consecutive division titles for the first time.

And the White Sox are winning with manager Tony La Russa sidelined by a health issue.

Elvis Andrus hit a tiebreaking double against his former team with two outs in a five-run ninth inning, and the White Sox — held hitless until the seventh — rallied past the Oakland Athletics 5-3 on Friday night.

"I think the attitude in here has been a little bit more yelling at each other, which I think is one of the things that we thrive upon," closer Liam Hendriks said. "And it's obviously paying dividends the last few games. As you see we're having fun, we're cheering each other on, it's no dead spots in the dugout. We just kind of make fun of everybody and it kind of flows into it. Those positive vibes will completely change the course of a season."

Eloy Jiménez started the comeback from a 3-0 deficit with a one-out homer against A.J. Puk (3-2), who issued a walk and plunked a batter. Andrew Vaughn added an RBI single and Romy González delivered a tying single with two outs.

Oakland challenged that pinch-runner Adam Engel was out at the plate on the throw home, but the safe call was confirmed after a replay review.

"They don’t give up," White Sox acting manager Miguel Cairo said. "And they believe that we can do it. We don’t give up. That’s the phrase that Tony used: ‘Never give up.’"

Andrus, released by the A's last month, then hit a two-run double to left field that put Chicago ahead 5-3.

"One of the good benefits of playing your old team is I know a lot of the tendencies of the pitchers, especially Puk," Andrus said. "I’ve been behind him a lot, and I know how he approaches hitters in different situations. So I had my plan, and I was really glad that he threw me the fastball there and I was able to put a good swing on it."

Hendriks, another former A's star, closed it out with a big fist pump after his 32nd save. Aaron Bummer (2-1) pitched the eighth for the win.

"These are games that earlier in the year we didn't win," Hendriks said.

Pruitt made a spot start after right-hander James Kaprielian was scratched. It was Pruitt’s first start since 2019 with the Rays.

Sean Murphy had an RBI double and Tony Kemp singled in a run for the A's, who went ahead on Ramón Laureano's RBI groundout in the first. Oakland lost its fourth in a row and eighth in nine games.

The 33-year-old Pruitt didn’t allow a baserunner until Andrus, the former A’s shortstop, reached on an error by second baseman Sheldon Neuse to begin the fourth. Vaughn then reached on third baseman Vimael Machin’s two-base throwing error past first in the fifth, but Pruitt escaped unscathed.

Right-hander Dave Stewart will finally get his No. 34 jersey retired by the A's in a pregame ceremony Sunday.

He's expecting 200 family members and friends, and additionally former teammates and fans. Mark McGwire is expected to be part of the festivities.

Stewart, now 65, found out in August 2019 the club planned to retire his number but then it didn’t happen during the pandemic-shortened 2020 season or last year.

"My initial emotion that was in 2019 or 2020 I got choked up. I was emotionally choked up because I knew the standards that had been set by the organization and who the people were whose numbers were retired," he said Friday on a conference call. "It was just a dream come true for a hometown kid who grew up in the backyard of the Coliseum."

White Sox: CF Luis Robert missed his third straight game with left wrist soreness. He hit in the cage, took batting practice and received more treatment as the White Sox determined when he might return to the lineup. "He felt good over there. He looked good," Cairo said. ... C Yasmani Grandal was held out with back tightness but could play Saturday if he's better. ... La Russa missed his 10th straight game and is out indefinitely because of an unspecified health issue, with bench coach Cairo acting as manager. But Stewart certainly expects La Russa, his manager in Oakland, to return for Sunday's series finale.

Athletics: Kaprielian couldn't start after he cut the middle finger of his pitching hand Thursday night when he hit it against a wall putting on his shirt. "It's unfortunate for Kap. I know he was excited about making his start tonight," manager Mark Kotsay said. "Some things are out of your control. It's one of those freak accidents that happens."