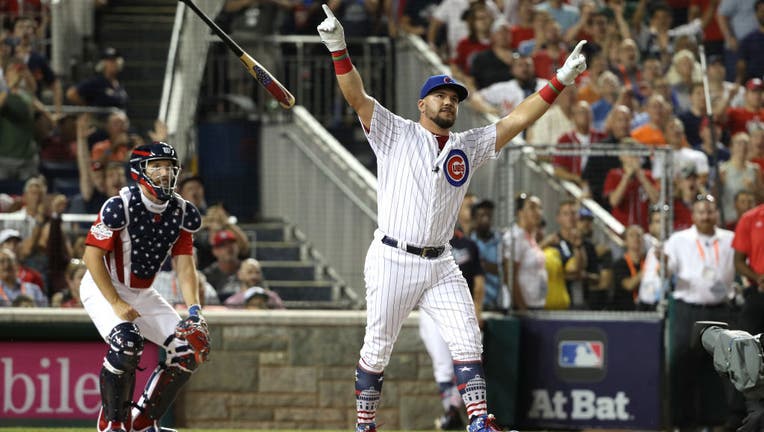 WASHINGTON, DC - JULY 16: Kyle Schwarber of the Chicago Cubs and National League celebrates in the semifinals during the T-Mobile Home Run Derby at Nationals Park on July 16, 2018 in Washington, DC. (Photo by Patrick Smith/Getty Images)

WASHINGTON - Slugging outfielder Kyle Schwarber has agreed in principle to a one-year, $10 million contract with the Washington Nationals, according to a person familiar with the deal.

The person confirmed the agreement to The Associated Press on condition of anonymity on Saturday because a physical exam was still pending for Schwarber.

Schwarber was able to sign with any club after becoming a free agent last month when he was non-tendered by the Chicago Cubs. He was a member of their drought-ending 2016 World Series championship team, hitting .412 in the Fall Classic after missing much of that season with an injured left knee.

The 27-year-old Schwarber struggled at the plate during the pandemic-truncated 2020 season, hitting .188 with a .701 OPS for the Cubs. A year earlier, he produced 38 homers and 92 RBIs, a .250 batting average and an .871 on-base plus slugging percentage, all career highs.

He was the No. 4 overall pick in the 2014 amateur draft and has proven to deliver homers and strikeouts in bunches.

Unless the designated hitter rule is brought back to the National League in 2021, it seems likely that Schwarber could start in left field, with Soto sliding from that spot over to right field, where he saw a bit of time late last season.

The Nationals went 26-34 in 2020 and tied for last place in the NL East, a year after winning the franchise’s first World Series title.