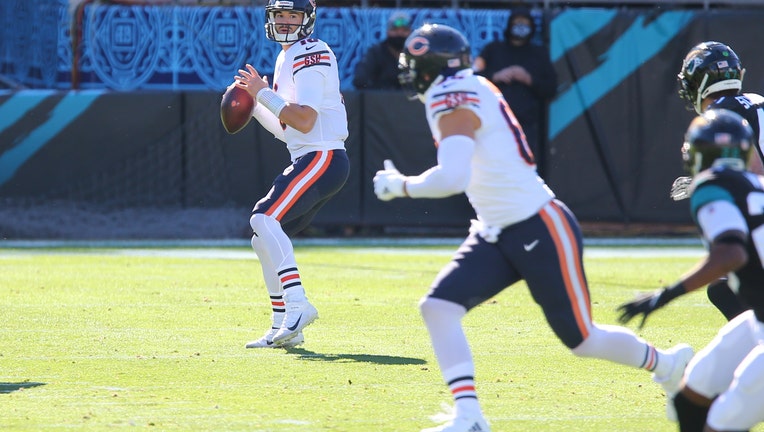 Chicago Bears Quarterback Mitchell Trubisky (10) looks for a receiver during the game between the Chicago Bears and the Jacksonville Jaguars on December 27, 2020 at TIAA Bank Field in Jacksonville, Fl. (Photo by David Rosenblum/Icon Sportswire via G

JACKSONVILLE, Fla. - The Jacksonville Jaguars took care of business against the Chicago Bears on Sunday, losing their 14th consecutive game and then getting some help to secure the No. 1 pick in the 2021 NFL draft.

Mitchell Trubisky accounted for three scores, including two touchdown passes to Jimmy Graham, and the Bears pounded the Jaguars 41-17 in a game that meant as much to Jacksonville's long-term future as it did to Chicago's short-term fate.

The Bears (8-7), who gained control of their postseason path when Arizona lost to San Francisco on Saturday, can make the NFC playoffs for the second time in three years by beating Green Bay next week at home.

The Jaguars (1-14), who set a franchise record for consecutive losses, locked up the top pick for the first time in franchise history when the New York Jets beat Cleveland 23-16 a few minutes later.

That means the same day Jacksonville reached its worst skid in franchise history could end up being a potential game-changer for the small-market team that's spent the better part of the last two decades searching for a franchise quarterback.

The only thing standing between Jacksonville and Lawrence is the Clemson star formally turning pro, a decision that's expected after the Tigers end their season in the College Football Playoff.

The Jaguars' latest loss was over long before the clock ran out. Chicago scored 28 unanswered points to start the second half, getting so far in front that Nick Foles got to close out the game against his former team.

Trubisky completed 24 of 35 passes for 265 yards, with two touchdowns and an interception. He also ran for a score. Trubisky's performance was far from perfect. His interception came in the end zone late in the first half -- he inexplicably scrambled and threw into a crowd -- with the Bears in field-goal range, and he nearly had another early in the third.

But safety Jarrod Wilson dropped the ball and then dropped to the ground to do 10 pushups.

Allen Robinson finished with 10 catches for 103 yards against his former team. Robinson spent the first four years of his NFL career with the Jaguars.

Graham had four receptions for 69 yards.

Former Bears quarterback Mike Glennon made his fourth start of the season for Jacksonville and had two touchdown passes and two interceptions. Glennon nearly had a third turnover, but nose tackle Bilal Nichols dropped a ball at the line of scrimmage that hit him in the chest.

David Montgomery and rookie Artavis Pierce each scored on the ground.

Chicago scored 30 or more points for the fourth consecutive week, the first time the Bears have accomplished the feat since 1965.