CHICAGO - In the first round of the 2022 NHL Draft, the Chicago Blackhawks Thursday night selected Kevin Korchinski.

The Blackhawks picked seventh in the draft when they chose Korchinski. 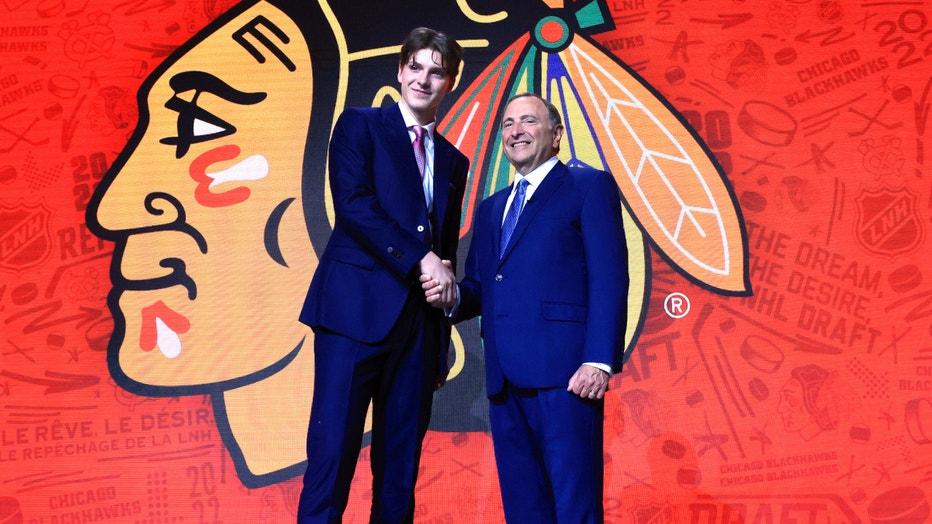 MONTREAL, QUEBEC - JULY 07: Kevin Korchinski is drafted by the Chicago Blackhawks during Round One of the 2022 Upper Deck NHL Draft at Bell Centre on July 07, 2022 in Montreal, Quebec, Canada. (Photo by Bruce Bennett/Getty Images)

Korchinski is from Canada.

Earlier in the day, the Blackhawks traded away both Alex DeBrincat and Kirby Dach.

The long-anticipated dismantling of the Chicago Blackhawks’ roster begun Thursday with the team trading Alex DeBrincat to the Ottawa Senators and Kirby Dach to the Montreal Canadiens.

In completing a third trade to acquire goalie Petr Mrazek from the Toronto Maple Leafs, the Blackhawks went from having no first-round picks in the NHL draft in Montreal to making three picks through the evening.

Chicago acquired the seventh and 39th picks in this year’s draft and a third-rounder in 2024 for DeBrincat, who is likely a year away from a big payday. The Blackhawks acquired the No. 13 pick by trading Dach to Montreal.

In adding Mrazek, the Blackhawks acquired the No. 25 selection for helping the Maple Leafs free up much-needed salary cap space. Mrazek has two years remaining on a three-year $11.4 million contract he signed with Toronto.

Dealing DeBrincat signals a shift into win-soon mode for the Senators, while the Blackhawks moved even further away from contending again a year after making moves like acquiring defenseman Seth Jones and Marc-Andre Fleury.

With a lot of losses coming up next season and beyond, the attention now turns to the future of longtime Blackhawks stars and three-time Stanley Cup-winners Jonathan Toews and Patrick Kane, whose matching contracts expire after next season.

They already gained some financial flexibility by trading DeBrincat, who is expected to attract a hefty raise once his current deal expires after the 2022-23 season.

DeBrincat, 24, has one year left on a $19.2 million, three-year contract, after which he is eligible to become a restricted free agent. Dorion said the Senators expect to start extension talks with DeBrincat’s agent next week when league rules allow them but added the team wants to make sure he’s a good fit in coach D.J. Smith’s system.

"Obviously, we would like to extend him at some point in time," Dorion said. "He was pretty excited. He talked to both myself and DJ earlier, and he was really excited. He knows we’ve got a really good, young group of players."

"It was an incredibly difficult decision to trade a player of Alex’s caliber. We feel as if this move sets the Blackhawks up for future success by giving us additional flexibility and future talent," Davidson said in a statement.

"Securing this early of a first-round pick for tonight and an additional second-round selection tomorrow allows us to fortify our prospect base with high-end players who we expect to be a difference-makers in the coming years."

The trades come with the Blackhawks having reached a crossroad in their franchise’s direction. Chicago has missed the playoffs in four of the past five seasons, and hasn’t won a postseason round since 2015, when the Blackhawks won their third Stanley Cup in six years.

Toews and Kane — still one of the league’s most dynamic players at age 33 — have no-movement clauses, making a trade unlikely unless they ask for a change in scenery. But DeBrincat’s departure could prompt Kane or Toews to seek a new home.

DeBrincat was selected by Chicago in the second round of the 2016 draft. He put up big numbers with the OHL’s Erie Otters in juniors, but he slipped down some draft boards because of his height at 5-foot-7.

Those concerns turned out to be unfounded.

DeBrincat has been one of the NHL’s most prolific scorers since his debut with the Blackhawks in 2017. The winger matched his career high with 41 goals this past season and set a career best with 37 assists in 82 games.

But the Michigan native also has improved on the defensive end, becoming a more well-rounded player since entering the league.

He joins a burgeoning Senators roster that already features a collection of promising youngsters including Brady Tkachuk and Tim Stutzle.