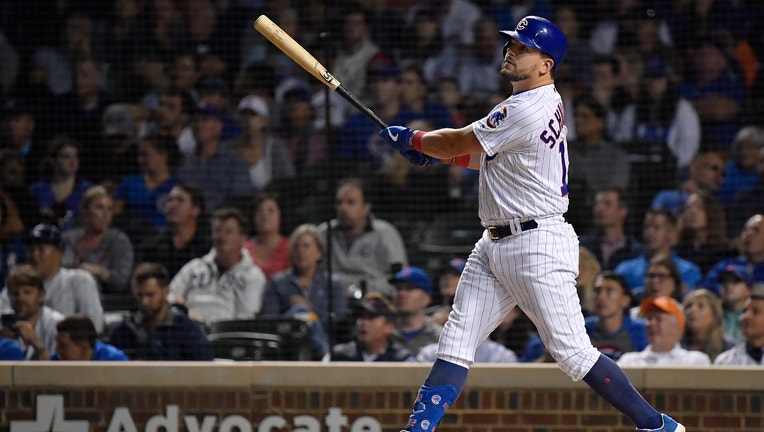 Kyle Schwarber #12 of the Chicago Cubs hits a three run home run in the first inning against the Cincinnati Reds at Wrigley Field on September 16, 2019 in Chicago, Illinois. (Photo by Quinn Harris/Getty Images)

Chicago also announced it had claimed reliever Robert Stock off waivers from the Boston Red Sox. The 31-year-old right-hander was designated for assignment last week.

Wednesday’s non-tender deadline was the first major look at the state of the Cubs since Jed Hoyer was promoted to president of baseball operations last month, replacing Theo Epstein. While the Cubs held onto All-Star sluggers Bryant, Báez, and Contreras, those players could still be on the move this winter via trade if the club looks to cut more payroll.

Schwarber quickly became a fan favorite in Chicago upon arrival, flashing tape-measure power at the plate. He also played in the 2016 World Series after missing most of the season with a left knee injury. The slugger served as the designated hitter for the games in Cleveland and hit .412 (7 for 17) with two RBIs as the Cubs won their first championship since 1908.

Almora made a key play in Game 7 against Cleveland, running for Schwarber in the 10th inning and advancing to second on Bryant’s fly ball to center. Almora then scored the go-ahead run on Ben Zobrist’s double in the Cubs’ 8-7 victory over the Indians.

Almora was selected by Chicago with the No. 6 overall pick in the 2012 amateur draft, and Schwarber went fourth overall in 2014. While Almora has struggled at the plate, Schwarber’s lefty power bat could attract significant interest on the open market — especially at designated hitter — despite his shortcomings in left field.

The 27-year-old Schwarber, a converted catcher, stumbled during the pandemic-shortened season, batting .188 with 11 homers in 59 games for the NL Central champions. But he set career highs with 38 homers, 92 RBIs and a .250 batting average in 155 games in 2019.