CHICAGO - Duncan Keith has kept in touch with a few of his old teammates since he was traded to Edmonton in July. He had dinner with Patrick Kane and Alex DeBrincat when the Chicago Blackhawks played the Oilers earlier in the season.

This, however, is a different deal.

The 38-year-old Keith plays his first game in Chicago as a visitor when the Oilers take on the Blackhawks on Thursday night.

"I spent a lot of time here. It’s nice to be back, but definitely a unique feeling," Keith said.

Keith developed into one of the NHL’s top defensemen while spending 16 years in Chicago, winning the Norris Trophy twice and three Stanley Cup titles. He was awarded the Conn Smythe Trophy as playoff MVP when the Blackhawks took home the championship in 2015. 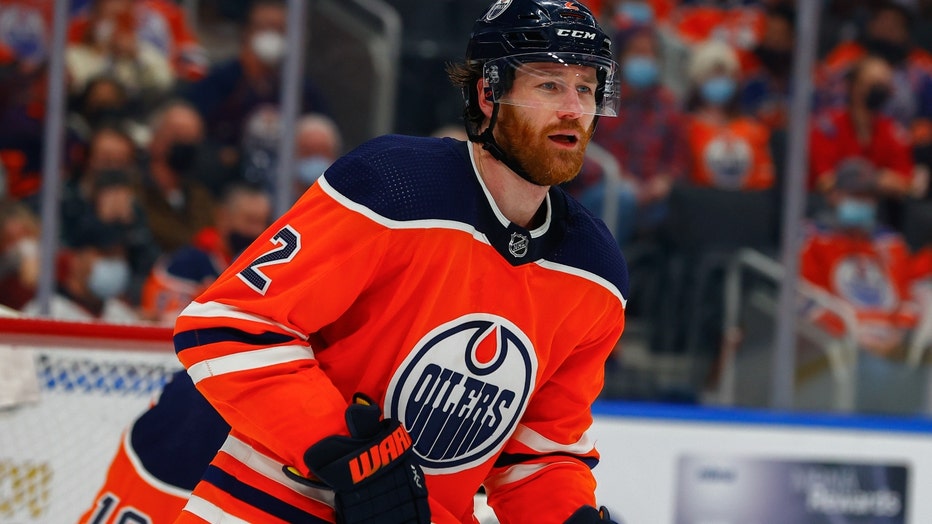 Edmonton Oilers Defenceman Duncan Keith in action in the second period during the Edmonton Oilers game versus the Calgary Flames on January 22, 2022 at Rogers Place in Edmonton, AB. (Curtis Comeau/Icon Sportswire via Getty Images / Getty Images)

Keith asked the Blackhawks for a trade to Western Canada to be closer to his son, Colton, after they spent long stretches apart last season.

"It’s been nice. I’ve been able to see him more frequently," Keith said after the Oilers practiced at the United Center on Wednesday. "The visits, even just being able to get back home for little breaks here and there, so definitely the more frequent time spent with him has been nice, and it’s been just basically everything that I had hoped (for)."

Keith’s return to Chicago coincides with the Blackhawks paying tribute to Niklas Hjalmarsson, another key defenseman from the team’s run of three Stanley Cup titles in six seasons. Hjalmarsson was traded to Arizona in June 2017 and retired in July.

Keith, a Winnipeg, Manitoba, native, was selected by Chicago in the second round of the 2002 draft. He made his NHL debut in 2005 and had 105 goals and 520 assists in 1,192 regular-season games with the Blackhawks.

"He was a great teammate," Blackhawks forward Dylan Strome said Thursday. "You know, a big jokester. He likes to have fun, likes to keep it pretty light in the room, and then he’s one of the most serious guys when it comes to the ice. He’s a warrior, a guy that Edmonton’s lucky to have."

The Oilers celebrated Keith’s return to Chicago on Wednesday, forming a corridor with their sticks for Keith to walk under on his way to the visiting locker room.

"He’s been unbelievable. He’s a great leader, even stepping in just this year," Oilers forward Kailer Yamamoto said. "He’s a big role model for me. I’ve watched him, you know, growing up and see him win a few Cups here. That’s pretty cool, and he’s just a really good guy around the locker room."