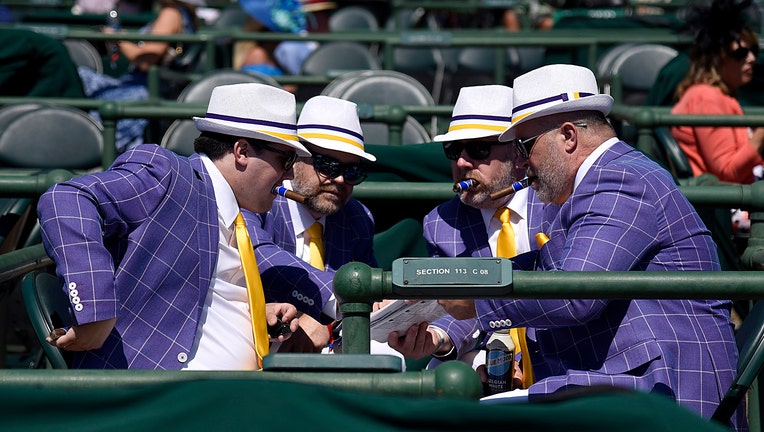 LOUISVILLE, KENTUCKY - MAY 01: Spectators sit in a box seat along the track before the 147th running of the Kentucky Derby at Churchill Downs on May 01, 2021 in Louisville, Kentucky. (Photo by Sam Mallon/Getty Images)

The bay colt led the $3 million race from start to finish after going off at 12-1 odds from the No. 8 post.

Medina Spirit held strong to the wire for his second career victory, a strong rebound from his runner-up finish to Rock Your World in the Santa Anita Derby.

There were 51,000 fans beneath the Twin Spires, or 100,000 less than usual. That's still a big improvement from last year's Derby, run on Labor Day weekend in virtual silence and out of sequence as the Triple Crown's second jewel instead of its first. It was moved from the first Saturday in May for the first time in 75 years.

Thousands of spectators gathered in the infield at Churchill Downs, many not wearing face masks required amid the coronavirus pandemic.

Hundreds stood in lines that were not spaced out to use ATMs or buy food. Unlike some Derby tickets this year that are all-inclusive, infield tickets don't include drinks or food, so fans have to use cash to make purchases.

Sydney Lowe of Columbus, Ohio, said she and her friends were fine with not wearing masks because they were outside and had been vaccinated.

"We're outside, I feel like it's not that big a deal," Lowe said.

"I wish there were more ATMs and that it wasn't only cash, that's one thing," added her friend, Halle Vozar.

A recording played over a loudspeaker at the entrance says guests are required to wear masks over their mouths and noses. Ticket takers reminded people coming in the front gate: "Please have your mask on! Masks on! Masks on!"

A sign posted indoors by the wagering windows reminding spectators to wear masks largely went ignored. Others had masks pulled down covering their chins.