LAKE FOREST, Ill. - The Chicago Bears are reeling. And now, they might have to get by without Justin Fields.

Coach Matt Nagy said the team was still trying to determine Monday if their prized rookie quarterback bruised his ribs or broke them in the loss to the Baltimore Ravens.

"I can’t rule out anything, all I can say is we’re waiting to get feedback today and then that’s what we’ve got to go off of," he said.

The Bears (3-7) were hoping Fields would build on his best outing as a pro. Instead, he struggled Sunday before heading to the locker room in the third quarter, and the Bears lost their fifth straight game.

Fields completed just 4 of 11 passes for 79 yards after throwing for a career-high 291 yards at Pittsburgh two weeks earlier. His final play was a 6-yard scramble on third-and-11 at the Chicago 45 on the opening drive of the third quarter. 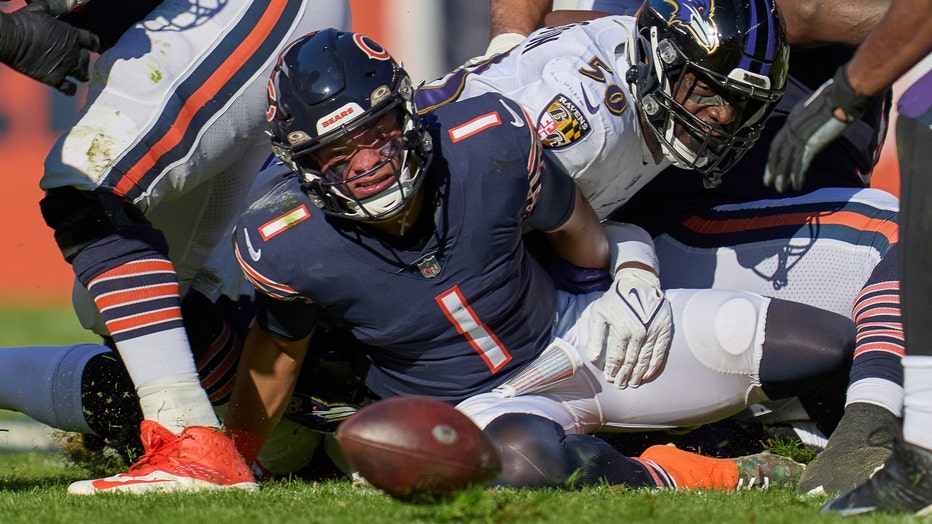 Chicago Bears quarterback Justin Fields fumbles the football during a game between the Chicago Bears and the Baltimore Ravens on November 21, 2021 at Soldier Field, in Chicago, IL. (Robin Alam/Icon Sportswire via Getty Images / Getty Images)

Fields went to the locker room and was replaced by veteran Andy Dalton. Who will start when the Bears visit winless Detroit on Thursday was unclear.

"Obviously it comes down to the doctors and whatever they say and what they tell us, what it is and how it is and then how you can or cannot play with that," Nagy said.

"And the other thing too in all this is as you guys know Justin is extremely tough and you have to know how to manage that and protect him from himself sometimes."

It’s not the first time Fields has injured his ribs.

He took a shot to them in the national semifinals last year when Clemson linebacker James Skalski nailed him in the right side of his torso. Skalski was ejected for targeting because he led with the crown of his helmet.

Fields missed one play and finished with six touchdown passes in Ohio State’s 49-28 victory. The ribs bothered him in the national championship game, and the Buckeyes lost 52-24 to Alabama.

The Bears are banking on Fields developing into a star after trading up nine spots with the New York Giants to draft him with the No. 11 overall pick. A big part of that is keeping him healthy. But he also needs snaps.

"We always want to make sure that all our players, we’re not putting them at more risk regardless of who you are," Nagy said. "Obviously, there’s more magnitude to everybody else and to us with Justin and being the quarterback and touching the football every play and throwing and that sort of thing. So we’ll have to keep that in mind."

The pass rush. The Bears were tied for the league lead with 31 sacks through Sunday after a recent dry spell knocked them down a few spots. The Bears sacked Baltimore’s Tyler Huntley six times, giving them 10 in the past two games. They had none in the previous two against Tampa Bay and San Francisco.

The offense. After showing some promise against Pittsburgh, the Bears took a step backward. It was the fifth time this season they failed to reach the 20-point mark. The Bears ranked 29th in scoring and 31st in total offense through Sunday.

LB Robert Quinn. The two-time Pro Bowler continued his bounce-back season with a career-high 3 1/2 sacks, giving him 10 on the season — tied for fifth in the NFL — after finishing with two in 2020. It’s the fifth season in double digits for the 11-year pro.

CB Kindle Vildor. The second-year pro was having a rough game even before he appeared to get beaten on a blown coverage when Sammy Watkins hauled in a 29-yard pass to the 3, setting Devonta Freeman’s winning run with 22 seconds remaining. He was called for two pass interference penalties, including a 21-yarder on the first play of that drive.

Nagy indicated a communication breakdown led to Watkins getting open, though he wasn’t sure how it happened, and that Vildor missed his assignment.

Nagy had no update on DB Duke Shelley (hamstring), who left after he was hurt covering a fourth-quarter punt.

8 — The Bears have eight straight losses following byes since a victory at Green Bay in 2013.

With a Thanksgiving game at Detroit, the Bears have a quick turnaround as they try to avoid matching the longest losing streak of Nagy’s four seasons. They dropped six straight last year.