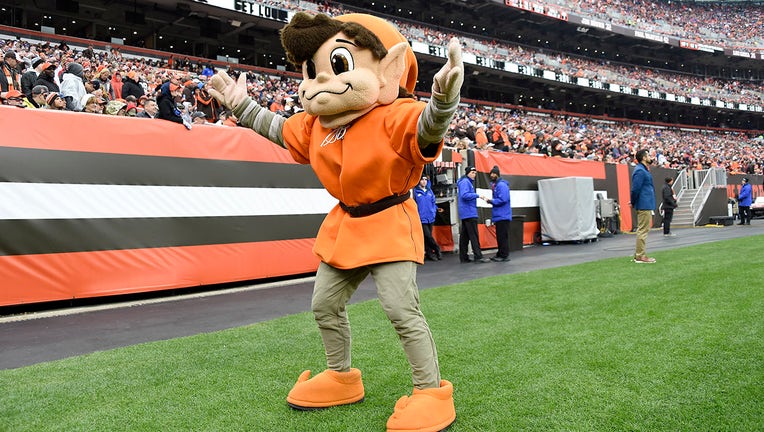 File: Cleveland Browns mascot Brownie the Elf waves to the fans during the second half against the Buffalo Bills at FirstEnergy Stadium on November 10, 2019 in Cleveland, Ohio. The Browns defeated the Bills 19-16. (Photo by Jason Miller/Getty Images)

CLEVELAND - The Cleveland Browns, one of the NFL’s oldest and most storied franchises, are famous for having the only logo-less helmet. But that doesn’t mean they don’t have a mascot.

Brownie the Elf is getting renewed attention this season after fans voted put him front and center on their home field. A giant version of the old mascot has replaced the Browns helmet on the FirstEnergy Stadium midfield turf.

If you don’t live in Northeast Ohio, you may be unfamiliar with Brownie. But the character actually dates back to the team’s debut in 1946; he was used in ads and media guides for years as the Browns won title after title. Legendary coach Paul Brown even toyed with the idea of adding him to the team’s helmets, but never did.

After Art Modell bought the team in 1961, he began to phase out the mascot. When he moved the team to Baltimore in 1995, the team’s legacy – and Brownie – remained in Cleveland, ready for a rebirth.

Brownie has been used more frequently in Browns merchandise and marketing materials in recent years, and has sometimes walked the sideline as a mascot. But this may be the first time a national football audience has seen him in decades.

"Brownie has been around for a long time," offered JW Johnson, Browns executive vice president and partner. "I think people enjoy him, and we haven't really showcased him as much as we'd like to."

The version on the field looks a little tougher and more aggressive than the more familiar smiling version that the team traditionally featured.

The new-look logo and field will debut during this weekend’s home opener. The Browns, who held off a furious comeback by the Panthers in Week 1, will host the Jets at 1 p.m.

NFL NEWS: Senator proposes bill to make sure everyone in Wisconsin can watch Packers games

This story was reported from Tampa, Fla.