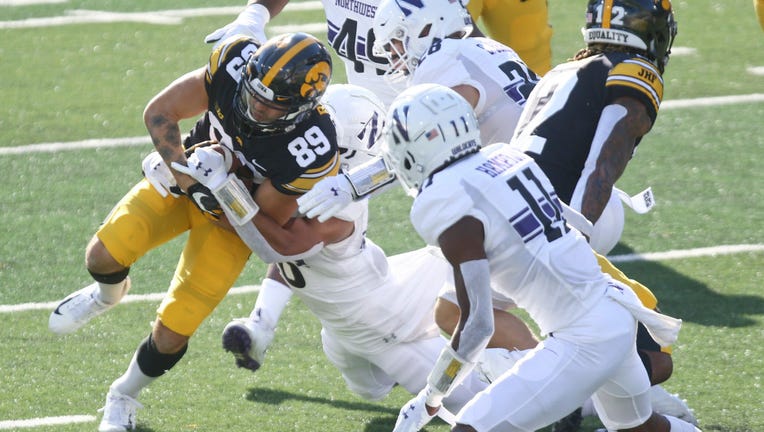 Wide receiver Nico Ragaini of the Iowa Hawkeyes is tackled during the first half by defensive back Cameron Ruiz of the Northwestern Wildcats at Kinnick Stadium on October 31, 2020 in Iowa City, Iowa. (Matthew Holst/Getty Images / Getty Images)

IOWA CITY, Iowa - Jesse Brown scored the go-ahead touchdown on a 2-yard run in the third quarter, and Northwestern erased an early 17-point deficit to beat Iowa 21-20 on Saturday.

The Wildcats outscored the Hawkeyes 21-3 after the first quarter, eating up clock and keeping the Hawkeye offense out of rhythm.

Spencer Petras threw all three of his interceptions in the second half, the last one on a tipped ball that linebacker Blake Gallagher picked off, allowing Northwestern to go into victory formation.

Iowa’s 17-0 first-quarter lead came after Northwestern gifted the Hawkeyes (0-2, 0-2) with two turnovers — a muffed punt inside the 5-yard line and a fumble near midfield. From there, though, Northwestern regained control.

Kyric McGowan scored on a 3-yard run and Brown scored from the 1 to pull the Wildcats within 20-14.

Iowa punted three times, had three passes intercepted and turned the ball over on downs on seven second-half possessions that netted a total of 104 yards.

Iowa: For the second-straight week, Iowa struggled to find consistency on offense. Petras completed 26 of his 50 passes for 216 yards, one touchdown, and three interceptions. There wasn’t much help from the ground game as the Hawkeyes averaged just 3.3 yards per carry.

Northwestern: The Wildcat defense is better than advertised, especially against the run. For the second straight week, Northwestern held its opponent to fewer than 80 rushing yards. Aside from the two touchdown drives by Iowa (both coming off turnovers and excellent field position), the Hawkeyes couldn’t string together much of anything against the Wildcats.

Advertising: Download the FOX Super 6 app for free and you can win a $100,000 jackpot! Download here now.