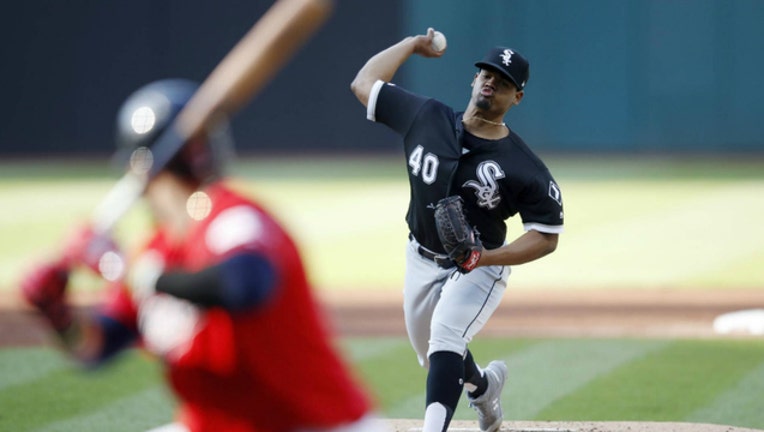 CLEVELAND (AP) - The way things have been going, José Ramirez's deep drive figured to be swallowed by the wind.

Once it cleared the wall, the Indians could exhale.

Ramirez hit a two-run homer with two outs in the ninth inning Wednesday night, giving Cleveland a 5-3 win over the Chicago White Sox that snapped an Indians' losing streak that felt like more than three games.

Francisco Lindor singled with one out against Jace Fry (1-1) before Jason Kipnis struck out. Chicago manager Rick Renteria brought in right-hander Kelvin Herrera to face the switch-hitting Ramirez and Lindor stole second on a 2-1 pitch.

Ramirez crushed Herrera's next pitch - a 96 mph fastball - through a stiff wind blowing straight into home plate that knocked down at least six previous flies and kept them in the ballpark.

When Ramirez's shot landed in the seats in right, it set off a much-needed celebration by the Indians, who have been looking for something to break them out of a season-long offensive slump.

"I understand we're struggling a little bit, but I trust in the teammates that we have," Ramirez said following his first career walk-off homer. "We're a competitive team. We have a good bunch of guys and thank God for this win. I know we're gonna keep going."

"As soon as he hit it, I was like 'I'm not sure,'" he said. "The way it's playing in the past couple of games, it seems like it's almost impossible to hit the ball over the fence to right field. But he crushed it. Any other day, or even tonight, when it's almost impossible, he made it happen."

Brad Hand (2-1) pitched a perfect ninth for the win as the Indians improved to just 5-9 in the AL Central.

"It's pick your poison with those guys (Lindor and Ramirez), but there is no question in my mind how we thought we should attack them. We've got two of the best guys in the game, either holding or closing with Jace and Kelvin."

The Indians came in as the AL's worst hitting team - last in average, hits, doubles and triples - and had scored just one run in 27 innings before Tyler Naquin's two-run single off starter Reynaldo López in the fourth gave Cleveland a 3-1 lead.

The right-hander, who had allowed the White Sox just one run in 19 innings over three starts, gave up two singles and a sacrifice in the seventh before No. 9 hitter Ryan Cordell hit a game-tying, two-run single.

The Indians finally generated some offense in the fourth, scoring three runs off López, who entered with a 14.14 ERA in two previous starts at Progressive Field.

Gonzalez made two diving catches, the second for the final out in the eighth with a runner on.

"It's always nice to help your pitchers," he said. "Especially early in the game when there's a situation with runners at first and second with no outs then we made a great play like that, it gives your pitcher more confidence."

Francona was asked about Twitter and other platforms in the wake of pitcher Trevor Bauer's claims that he received death threats following his start Monday. Bauer attempted to make the most of the situation by saying more should be done to police online behavior and stop bullying.

"Any time somebody wants to turn something that's a potential negative into a positive is great," Francona said. "That's a good thing regardless of what it is. Whether it's on the baseball field or in your life, or whatever."

White Sox: OF Leury Garcia (thumb bruise) was not in the starting lineup for the second straight day. He came in to pinch-run in the eighth and went into center field.

Indians: RHP Adam Plutko (forearm) had a rough outing at Triple-A Columbus on Tuesday, allowing five runs while only recording one out. With Corey Kluber and Mike Clevinger on the disabled list, Cleveland is hoping Plutko can become an option to start soon.