CHICAGO - Luis Robert hit a two-run homer in the 10th inning after Johnny Cueto’s impressive Chicago debut, and the White Sox defeated the Kansas City Royals 5-3 on Monday night in the opener of a five-game series.

Yasmani Grandal also had a two-run shot for the White Sox, who squandered a 3-0 lead in the eighth.

"It was an important win for us," manager Tony La Russa said.

The 36-year-old Cueto pitched six shutout innings in his first major league start this season after getting promoted from Triple-A Charlotte. He allowed just two hits and two walks, striking out seven. Only one runner reached second base against him.

"That’s the Johnny Cueto you’ve seen," La Russa said. "He’s so deceptive. His fastball plays harder. He spots it. He’s down with a soft one and then he throws one by you. That shows you his talent. The number one thing we needed from him was to give us a chance to win. To go six shutout innings is more than you can (hope for). But you can’t be surprised. That’s what he has been his whole career." 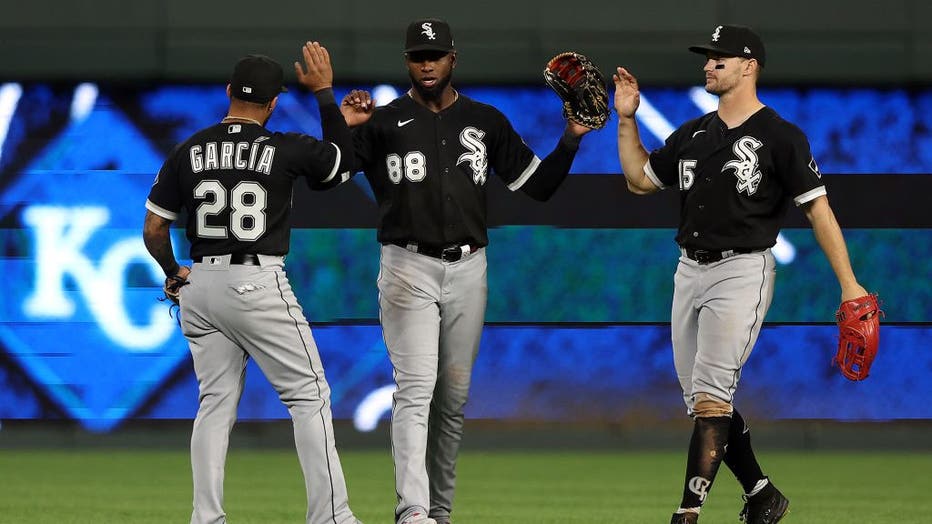 Leury Garcia #28, Luis Robert #88 and Adam Engel #15 of the Chicago White Sox congratulate each other after the White Sox defeated the Kansas City Royals 5-3 to win the game in the 10th inning at Kauffman Stadium on May 16, 2022 in Kansas City, Misso

Cueto, a two-time All-Star, made his first appearance on the Kauffman Stadium mound since throwing a two-hitter for Kansas City against the New York Mets to win Game 2 of the 2015 World Series. He was acquired from Cincinnati just before the trade deadline that year and played a key role in the Royals’ championship.

"Throughout my career I have always put special emphasis on my first start of the season," Cueto said. "I did it today. I was excited. I was facing a young team, a team that I used to play with. I knew this was a good team, too."

Ryan Burr (1-1) worked a scoreless ninth and Liam Hendriks earned his 10th save in 13 tries.

Barlow got five outs without giving up a hit until Robert went deep.

Brad Keller also was solid for Kansas City. He allowed three runs and eight hits in seven innings — with many of the hits coming on soft contact.

The White Sox got their first run on a sacrifice fly by Andrew Vaughn in the third. Adam Engel led off with a fly ball that dropped between left fielder Andrew Benintendi and center fielder Michael A. Taylor. Engel then stole second and scored on Vaughn’s fly to right.

Grandal made it 3-0 when he lined an 0-2 pitch into the right-field bullpen. He drove in Robert, who extended his hitting streak to a career-high 14 games with an infield single.

The Royals tied it in the eighth against Kendall Graveman. Whit Merrifield lined a two-run double off the wall in left-center. He went to third on the throw home and scored on a single by Benintendi.

Chicago selected Cueto’s contract and optioned INF Danny Mendick to Charlotte. Cueto agreed to a minor league deal with the White Sox in April. His contract includes a $4 million salary in the majors and a $210,000 salary in the minors. He went 0-1 with a 5.17 ERA in four starts with Charlotte.

The White Sox will send RHP Dylan Cease (3-1, 3.55 ERA) to the mound in the opener and wait until after that game to determine who gets the ball for the nightcap. La Russa said it’s possible RHP Lucas Giolito (2-1, 2.70) could return from the COVID-19 injured list.

The Royals will have Jonathan Heasley (0-1, 2.70 ERA) pitch one game and Brady Singer (0-0, 6.35) the other. Kansas City manager Mike Matheny had not announced the order.