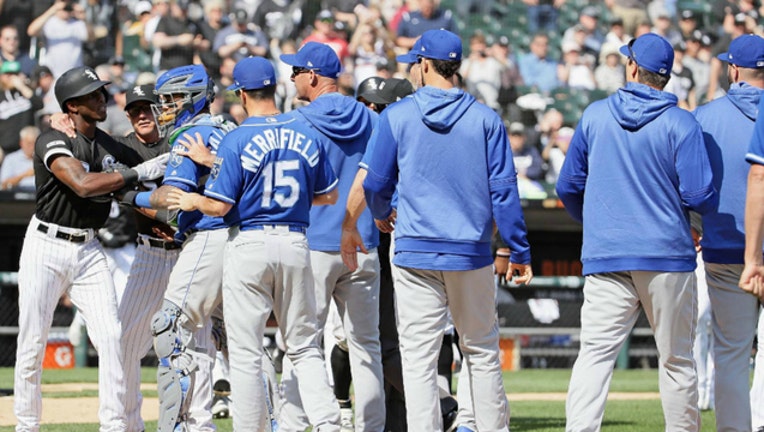 Martin Maldonado #16 of the Kansas City Royals and other Royals players block Tim Anderson #7 of the Chicago White Sox from charging the mound in the 6th inning at Guaranteed Rate Field on April 17, 2019. (Photo by Jonathan Daniel/Getty Images)

CHICAGO (AP) - White Sox youngster Tim Anderson was drilled by a fastball two innings after emphatically spiking his bat to celebrate a home run, sparking a benches-clearing fracas with the Kansas City Royals on Wednesday.

Anderson chucked his bat toward Chicago's dugout while admiring his two-run shot off Brad Keller in the fourth. Keller plunked Anderson in the backside with his first pitch leading off the sixth.

Anderson was quickly restrained by Kansas City catcher Martin Maldonado but jawed with Keller on his way to first base. The dugouts and bullpens emptied, though no punches appeared to be thrown. White Sox manager Rick Renteria and Royals bench coach Dale Sveum shoved each other, and the usually mild-mannered Renteria was particularly animated.

The White Sox and Royals also had a benches-clearing incident following one of Anderson's homers last April.