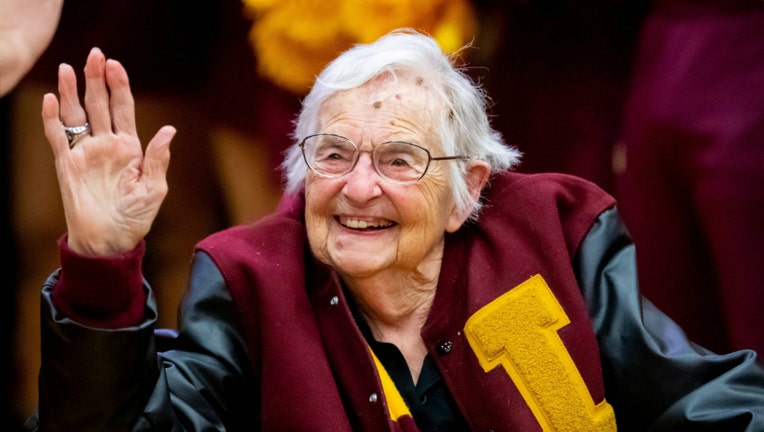 CHICAGO - The best COVID-19 vaccine shots in America just might be the two that went into Sister Jean’s arm.

The breakout star and model for the most coveted bobblehead of the 2018 NCAA Tournament is now eight months beyond her 101st birthday and still serving as chaplain for the Loyola of Chicago basketball team. It took two vaccinations and some serious wrangling, but Sister Jean Dolores Schmidt was back on the scene Friday in Indianapolis watching her beloved Ramblers in person, sporting brand-new, brick-red kicks but the same radiant smile — a fresh reminder for a pandemic-weary fan base that a little perseverance still goes a long way.

In this case, thankfully, she didn’t have to wait long. The eighth-seeded Ramblers were deadly behind the arc and dominated the boards to pull away for a relatively easy 71-60 win over No. 9 Georgia Tech. Loyola’s next opponent, Midwest Regional No. 1 seed Illinois, is bound to provide a much stiffer test of Sister Jean’s faith.

Yet her celebratory fist bump at the buzzer was one of the signature moments of the first full day of an NCAA Tournament canceled a year ago due the pandemic. The time away hardly blunted the tourney’s reputation for producing upsets, though to be fair, ranking teams based on a string of chaotic conference tournaments and a shortened regular season — 20 percent of games wound up cancelled — was probably more hit-and-miss than usual.

The biggest takedown was scored by No. 15 seed Oral Roberts, which needed overtime to escape second-seeded Ohio State 75-72. That marked just the ninth time in tournament history it happened.

"We put our shoes on just as the other team puts their shoes on," said Kevin Obanor, who led Oral Roberts with 30 points. "We just had the mindset of, ‘Show us that you deserve to be No. 2,’ and we came out with a lot of confidence."

Not long after, No. 13 North Texas registered its first tourney win by stunning a second entry from the mighty Big Ten Conference, fifth-seeded Purdue 78-69, and Oregon State claimed this year’s first by-now familiar 12-seed-over-a-No. 5 slot by handily beating Tennessee 70-56. Syracuse, an 11 seed, made a staggering 56% percent (15 of 27) of its 3-point attempts en route to burying No. 6 San Diego State 78-62.

That game also produced one of those father-son moments sports are so good at: Buddy Boeheim, who made seven of his 10 3-point shots — including one from the edge of half-court logo — finished with 30 points, one better than the school record set by his father, Syracuse head coach Jim Boeheim, in the 1966 tournament.

Finally, No. 10 Rutgers pulled off a mild upset over seventh-seeded Clemson, 60-56, while No. 9 Wisconsin’s 85-62 pasting of No. 8 North Carolina hardly qualified as that, unless you count Tar Heels coach Roy Williams’ first-ever loss in a tournament opener.

Baylor and Houston, the other No. 1 and No. 2 seeds in action, clobbered Hartford and Cleveland State, respectively. All the other higher seeds — Villanova, Texas Tech, Arkansas, Florida, Oklahoma State and West Virginia — also won.

Loyola guard Lucas Williamson, who scored a game-high 21 points to send the ACC Tournament-champion Yellow Jackets packing, was a freshman during Loyola’s magical run to the Final Four in 2018. So much about this year’s tournament is different, but the feeling of accomplishment was the same.

"It feels so good, and I want to feel it again," Williamson began, smiling broadly.

But when the next question came about playing Illinois — which drowned No. 16 Drexel 78-49 in a dunkfest earlier in the day — he got serious.

"Going to take everything we got. They’re one of the best teams in the country," Williamson said. "That’s no secret."

ORU wasn’t exactly a secret — it boasts the nation’s leading scorer in Max Abmas — but only 4.25 percent of people who filled out brackets at the NCAA site picked them to oust the Buckeyes.

"When they rank them, it was only just a number at the end of the day," said Obanor, who scored seven of his 30 in overtime. Abmas added 29.

The Golden Eagles face another tall task when they meet No. 7 Florida. But Ohio State coach Chris Holtmann left little doubt how much better that was than the alternative.

"Obviously, a really bitter end to terrific season. We’ll own that, accept it and …" he paused, fighting back tears, "we’ll move forward."