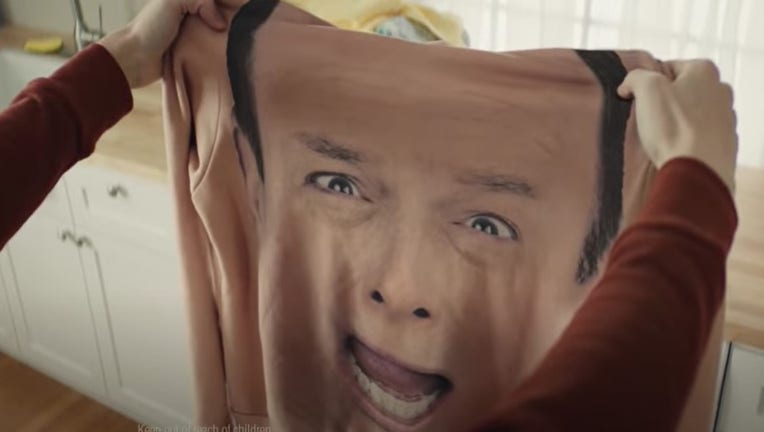 Tide featured former "Seinfeld" star Jason Alexander for its commercial. His face was painted on a teenager’s hoodie. (Credit: Tide)

The COVID-19 pandemic reshaped the advertising landscape for Super Bowl 2021. Many big names were missing from the Super Bowl commercials this year, and the pandemic certainly shaped the conversation and tone for many of the spots.

Some major companies that opted out of buying the coveted commercial slots this year instead donated the money to COVID-19 relief.

For the first time since 1983, when Anheuser-Busch used all of its ad time to introduce a beer called Bud Light, the beer giant isn’t advertising its iconic Budweiser brand during the Super Bowl. Instead, it’s donating the money it would have spent on the ad to coronavirus vaccination awareness efforts. Anheuser-Busch will still advertise Bud Light.

The Anheuser-Busch move followed a similar announcement from PepsiCo., which won’t be advertising its biggest brand, Pepsi, in order to focus on its sponsorship of the halftime show. (It will be advertising Mountain Dew and Frito-Lay products).

Other veteran Super Bowl advertisers like Coke, Audi and Avocados from Mexico are sitting out the game altogether.

However, some companies still doled out the money to bring the much-anticipated "Super Bowl commercials" to viewers.

Amazon tapped into its romantic side, personifying its virtual assistant Alexa as actor Michael B. Jordan. A wife envisioned Alexa as Jordan as she navigated her day and night.

The company didn’t pay to feature Budweiser beer but released a corporate ad, urging people to grab a beer and lean on each other during the COVID-19 pandemic.

Bud Light parodied Marvel’s movie "The Avengers" when a truck, carrying the merchandise, overturned. It was up to the superheroes, like comedian Cedric the Entertainer and singer Post Malone, to get the beer to the store for customers.

Bud Light also featured its seltzer lemonade by showing how they took all the proverbial lemons that rained down on the world in 2020 and turned them into a drink.

Cheetos featured "That ‘70s Show" stars Mila Kunis and Ashton Kutcher, with a featured appearance by singer Shaggy. Kutcher accused Kunis of stealing his Cheetos while singing a parody of Shaggy’s hit song "It Wasn’t Me."

The restaurant chain decided not to use celebrities to market its product. Instead, a burrito prompts a young boy to ask big questions about how to improve the environment.

Matthew McConaughey joined Mindy Kaling and Jimmy Kimmel for this spot. McConaughey appeared as a 2D version of himself until he ate Doritos 3D.

This commercial brought in an all-star NFL cast and had Marshawn Lynch telling the story of "The Night Before Super Bowl." Appearances included Terry Bradshaw and the Manning brothers - in matching sleepwear - getting yelled at by their father.

The car company urged Americans to finish strong amid the pandemic and featured frontline workers who are helping to fight COVID-19.

General Motors with Will Ferrell, Kenan Thompson, and Awkwafina

Actor Will Ferrell urged Kenan Thompson and Awkwafina to "crush" Norway because the country sells more electric vehicles per capita than the U.S.

Comedian Brad Garrett starred as a sandwich mob boss in this spot.

This commercial had people using M&M’s as a peace offering when apologizing. Actor Dan Levy made an appearance.

In this commercial, rescuers were too distracted stacking chips to help astronauts who were stranded.

The beer company featured a man known as "your cousin" accidentally letting the iconic Clydesdales on the loose, wreaking havoc in Boston.

Scotts and Miracle-Gro grabbed some star power for its lawn growing business. The spot featured Leslie David Baker, Martha Stewart as well as John Travolta and his daughter making a TikTok video.

Country singer Dolly Parton flipped around her famous song, "9 to 5" to "5 to 9" for the web publishing program.

Singer Lenny Kravitz lent his time to the Stella Artois commercial, urging people to make the most of what life has to offer.

Tide with the Jason Alexander hoodie

Tide featured former "Seinfeld" star Jason Alexander for its commercial. His face was painted on a teenager’s hoodie. His expressions changed each time it got dirty before it gets placed in the washing machine. Alexander appeared in person in the end, confronting the teenager who wore the hoodie.

Tide is giving away a limited supply of the hoodie for those who contribute to a good cause.

Uber Eats with Mike Myers, Dana Carvey, and Cardi B

Uber Eats took it back to 1992, getting actors Mike Myers and Dana Carvey to reprise their characters as Wayne and Garth in the cult-classic movie "Wayne’s World." The duo, still sitting in Wayne’s mom’s basement, talked about how 2020 was horrible using some of their catchphrases from the movie.