TOKYO (AP) - Simone Biles is opting not to defend her Olympic vault title, pulling out of Sunday's event finals for both vault and uneven bars while she focuses on her mental health.

The 24-year-old six-time Olympic medalist removed herself from competition during the team finals on Tuesday and sat out Thursday's all-around final as well. Biles said on social media Friday that she is dealing with what is defined as "the twisties": the sudden inability to feel comfortable while twisting in midair.

Biles said she's battled the issue before, but typically only when it comes to vault and floor exercise. This time around, it's a problem on all four apparatuses. She is scheduled to compete in both the balance beam and floor exercise finals next week.

Biles had been working on performing the Yurchenko Double Pike vault in Tokyo. She unveiled the vault — one never done by a woman in competition — in May. If she had been able to successfully land the vault, which requires the gymnast to do a roundoff and back handspring onto the table before two backward somersaults with her hands clasped behind her legs, the vault would then carry her name in the sport's Code of Points.

USA Gymnastics said Biles will continue to be evaluated daily to determine her potential readiness for future competitions.

MyKayla Skinner, who had the fourth-highest score in vault during qualifications, will compete in vault finals for the U.S. alongside Jade Carey, who finished with the second highest score. Skinner initially did not make the vault finals because International Gymnastics Federation rules allow each country a maximum of two athletes per event in the finals. 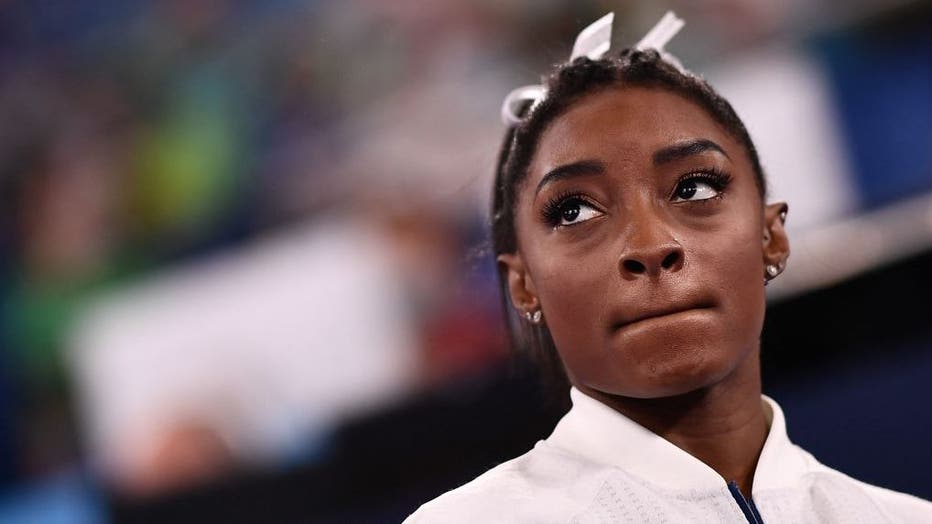 Simone Biles reacts during the artistic gymnastics women's team final during the Tokyo 2020 Olympic Games at the Ariake Gymnastics Centre in Tokyo on July 27, 2021. (Photo by LOIC VENANCE/AFP via Getty Images)

Skinner, 24, was an alternate on the 2016 Olympic team that won gold in Rio de Janeiro. She made the 2020 team as a "plus-one," competing in all four events during qualifying last Sunday. She actually finished 11th in the all-around during qualifying but did not make the 24-woman final because both Biles and eventual all-around champion Sunisa Lee posted better scores among American competitors.

Skinner posted a picture on Instagram after being named as Biles' replacement on vault expressing excitement over the chance to vie for a medal. She and Carey are both considered top contenders.