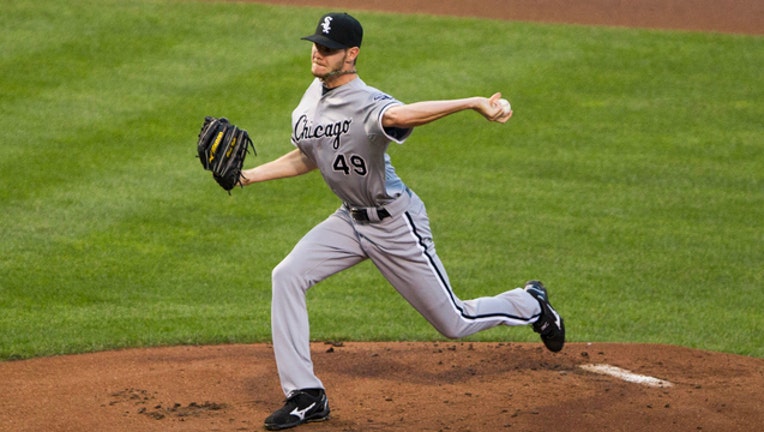 OXON HILL, Md. (AP) — No surprise that Chris Sale got traded, it was time to go. The real shocker? That the Boston Red Sox swooped in to snag him.

The reloading Red Sox pulled off the biggest deal yet at the winter meetings, acquiring the dominant ace from the Chicago White Sox on Tuesday for a hefty package of four prospects.

"The ability to get a Chris Sale doesn't come along very often," Boston president of baseball operations Dave Dombrowski said.

Sale joins an already talented rotation with the AL East champions, now pitching alongside 2016 AL Young Award winner Rick Porcello, former winner David Price and knuckleballer Steven Wright. He leaves behind a shredded reputation in Chicago, suspended by the team last summer after he flew into a rage and cut up retro uniforms that club was supposed to wear.

The 27-year-old Sale has been an All-Star in each of the last five seasons, finishing high in Cy Young Award voting every time, but has never played in the postseason. To get him, Boston traded four minor leaguers: high-priced third baseman Yoan Moncada, considered by many the top young talent in baseball, along with pitchers Michael Kopech and Victor Diaz, and outfielder Luis Basabe.

Sale was a top trade target across the majors this offseason, and the Washington Nationals seemed to be the favorites to land him this week.

"Ultimately, it came down to two in the end, and both of them were aggressive and presented us with solid packages that we had to choose between," White Sox general manager Rick Hahn said.

Said Nationals GM Mike Rizzo: "We put a lot of effort into it and thought we made a good, valiant effort ... and we fell short."

Dombrowski said the Red Sox had talked on-and-off to Chicago about Sale over the years, but "we really didn't have any ongoing conversations." The sides began speaking in earnest on Friday and "it accelerated," he said.

To New York Mets manager Terry Collins, it was a great deal — for him, being division rivals of the NL East champion Nationals.

"I really thought for sure he was going to end up in Washington. I really did," Collins said. "We dodged a bullet."

A few hours earlier, Boston got prime setup man Tyler Thornburg from Milwaukee. After that deal was announced, Dombrowski said, "We're trying to win now, as you can see."

Given his financial status, Sale "was controllable and projected to be damn good going forward, and it's tough to give that up," Hahn said.

"At the same time, we have to be realistic about where we are and the likelihood of, with this current group, getting to where we want to be. In the end we had to make the tough decision to let go of someone as valuable as Chris in order to pull back what we feel is a premium package that's going to help put us in a better position long term," he said.

"In between the lines, he pitches with an edge," Red Sox manager John Farrell observed. "His numbers and performance speak for themselves, but I think there is maybe a persona that he projects certainly across the field."

This year, the relationship between Sale and the White Sox became extremely strained.

Sale was suspended for five days without pay for destroying collared 1976-style uniforms the team was scheduled to wear July 23, saying they were uncomfortable. He lost $250,000 of his $9.15 million salary and also was fined about $12,700 — the cost of the tattered jerseys. He blamed manager Robin Ventura for not defending his players.

During spring training, Sale was quite vocal about the decision to limit the time teammate Adam LaRoche's son was allowed in the clubhouse. That flap led to hard feelings all around, along with LaRoche's retirement.

Boston went 93-69, then got swept by Cleveland in the AL Division Series and finish out the career of retiring slugger David Ortiz.