SAN FRANCISCO - Alex Wood took a no-hitter into the seventh inning and the San Francisco Giants beat the Chicago Cubs 4-2 on Thursday night to stop a seven-game slide.

An umpire’s ruling that appeared to give the Cubs a break instead contributed to San Francisco’s three-run third.

"He’s really deceptive, mixes pitches really well," Cubs manager David Ross said. "We chased a little bit out of the zone in some hitter’s counts at times, but he’s a really tough pitcher."

"When we play good defense, we have a chance to win every night," Wood said. 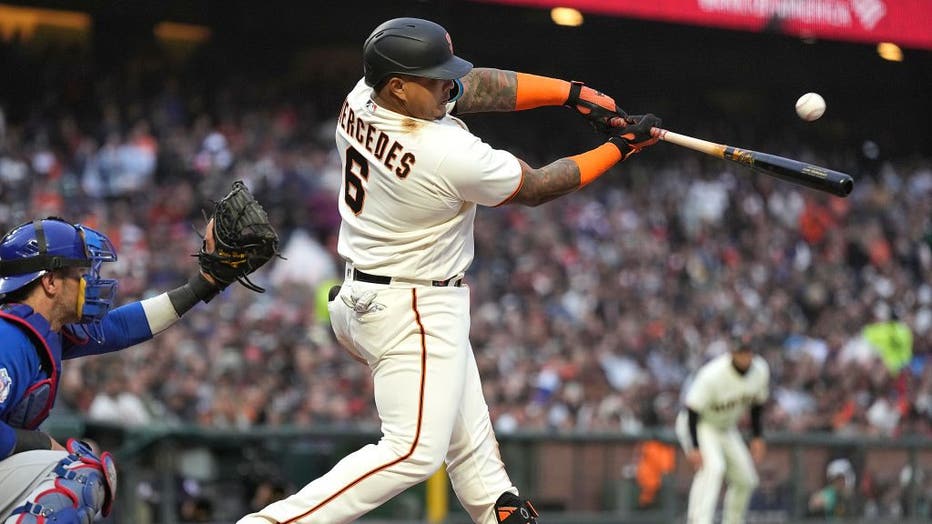 Yermin Mercedes #6 of the San Francisco Giants hits a bases loaded two-run rbi single against the Chicago Cubs in the bottom of the third inning at Oracle Park on July 28, 2022 in San Francisco, California. (Photo by Thearon W. Henderson/Getty Images

Wood’s no-hit bid ended in the seventh on Ian Happ’s leadoff single. Two outs later, Wisdom belted his 18th homer of the season, a drive to left field on an 0-1 pitch.

That trimmed San Francisco’s lead to 4-2 and prompted Giants manager Gabe Kapler to summon right-hander Dominic Leone, who struck out Frank Schwindel to end the inning.

John Brebbia threw eight pitches in a hitless eighth and Camilo Doval struck out three in a one-hit ninth for his 13th save.

The Giants opened the scoring against starter Justin Steele (4-7) in the third, which began with Wisdom’s misplay of Yastrzemski’s grounder to third for an error.

With runners at the corners and two outs, Steele uncorked what appeared to be a wild pitch that allowed Yastrzemski to score from third base. But a replay review requested by the Cubs determined the pitch grazed the right pants leg of batter Wilmer Flores, loading the bases.

Slater added an RBI double in the fourth.

"I think over this last stretch of about a month, it seems like we’ve been playing sloppy ball," Slater said. "It’s only a matter of time before we start taking advantage of other teams’ mistakes instead of it being the other way around."

All four runs Steele permitted in 3 2/3 innings were unearned. He allowed five hits and walked one while striking out six.

"One of those outings he had to work hard in some moments but we didn’t play well behind him," Ross said. "Starting pitching and defense go together, so you get usually good outings when the defense plays well behind you. We didn’t today. Made some mistakes that cost us a lot of runs."

Giants: 3B Evan Longoria (hamstring strain) fielded grounders before the game. ... OF Luis Gonzalez (back) was held out of the starting lineup.

Marcus Stroman (2-5, 4.38 ERA) takes the mound Friday night for the Cubs seeking his first win since coming off the injured list July 9. The right-hander hasn’t won since May 24 overall.

Giants RHP Alex Cobb (3-4, 4.26) has lost his last three decisions and will be going for his first victory since May 17.