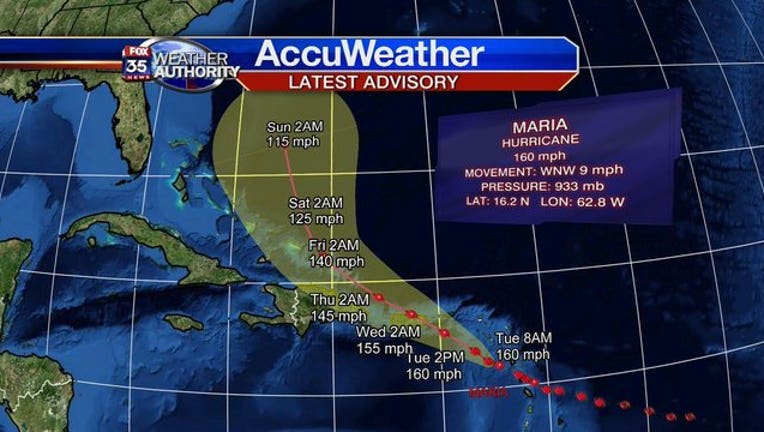 The U.S. National Hurricane Center said at 8 a.m. that the extremely dangerous Category 5 storm is on a forecast track approaching the Virgin Islands and Puerto Rico between Tuesday night and Wednesday.

The top sustained winds of the storm are near 160 mph (260 kph) and the Miami-based center says some fluctuations in intensity are likely over the coming days. At 8 a.m., the eye of Maria was about 85 miles (135 kilometers) west of Guadeloupe or about 170 miles (275 kilometers) southeast of St. Croix. The major hurricane is moving to the west-northwest at 9 mph (15 kph).

Meanwhile, Jose remained a Category 1 hurricane in the Atlantic as it churned up dangerous surf and rip currents along the U.S. East Coast. It was about 350 miles (560 kilometers south-southwest of Nantucket, Massachusetts, and had top sustained winds of 75 mph (120 kph).

Dominica Prime Minister Roosevelt Skeritt says there are initial reports of "widespread devastation" in the small island from Hurricane Marie.

The prime minister says he will be going around the country to see what has happened and what is needed as soon as the all-clear sign is given. But that his "greatest fear" is that the people of Dominica will wake to news of "serious physical injury and possible deaths."

He made the statement in a post on his Facebook page while the storm was still raging.

At one point, he lost the roof to his own official residence. He also said that the winds have swept away the roofs of many other people. He says his initial focus will be to rescue trapped people and secure medical aid

Forecasters say a Category 5 hurricane is a major and extremely dangerous storm capable of catastrophic winds. They add that fluctuations in intensity were expected and that further strengthening is possible as the storm moves over warm Carinbbean waters in coming hours and days.