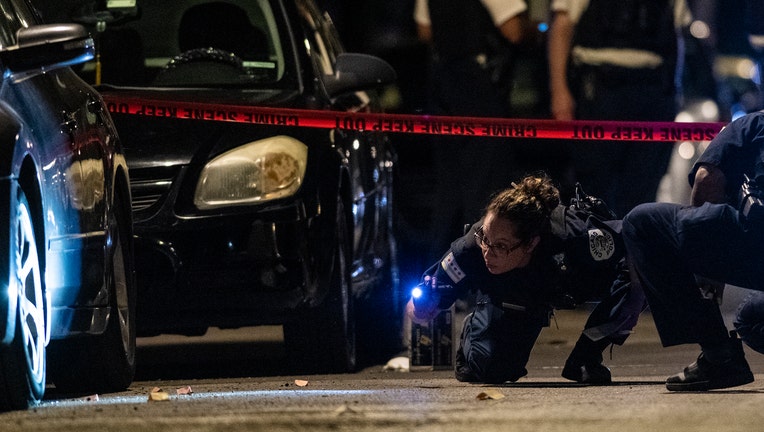 Chicago police investigate the scene where 4 people were shot including a 8-year-old boy in the 700 block of South Karlov in the Lawndale neighborhood. | Tyler LaRiviere/Sun-Times

The day’s most recent reported shooting wounded four people, including an 8-year-old boy, in Lawndale on the West Side.

They were standing on the sidewalk about 10:10 p.m. in the 700 block of South Karlov Avenue when someone in a black SUV unleashed gunfire, Chicago police said.

The boy was struck in his legs and taken to a hospital in fair condition, police said.

About 30 minutes prior a 14-year-old boy was wounded in a shooting in Roseland on the South Side.

He was walking on the sidewalk with a group of people about 9:41 p.m in the first block of East 102nd Street when someone in a vehicle opened fire, police said.

The teen was struck in the leg and taken to Comer Children’s Hospital in good condition, police said.

A man was shot in Grand Crossing on the South Side.

He was standing on the sidewalk about 9:22 p.m. in the 800 block of East 79th Street when someone opened fire, police said.

The 28-year-old was struck in the abdomen and left arm, police said. He took himself to Jackson Park Hospital, where he was listed in serious condition.

A man died after being shot at and a woman was wounded in a drive-by in Gresham on the South Side.

About 9:15 p.m. the 33-year-old man and a 28-year-old woman were at a gas station with a third person in the 8200 block of South Halsted Street, when someone inside a passing dark-colored minivan fired shots at them, police said.

The man ran into the gas station and collapsed inside the business, police said.

Officers found him unresponsive with a minor cut on his right shoulder, police said. He was not struck by gunfire.

He was rushed to the University of Chicago Medical Center in critical condition, but later died, police said. The Cook County medical examiner’s office has not released his name.

The woman was struck in the upper right thigh and taken to Christ Hospital in Oak Lawn for treatment, police said. She is in good condition.

Are Two detectives are investigating.

Just before then on the West Side, three men were shot in Humboldt Park.

They were in an apartment about 9 p.m. in the 1000 block of North St. Louis Avenue when a 28-year-old man they knew walked in and opened fire, Chicago police said.

The third man, 35, was hospitalized in good condition with a gunshot wound to the arm, police said.

The alleged gunman was taken into custody, police said.

A man is in critical condition after a double shooting in Albany Park on the Northwest Side.

The older man was struck in the chest and arm, police said. He was taken to Illinois Masonic Medical Center in critical condition.

The other man was shot in the leg and taken to St. Francis Hospital in fair condition, police said.

A person is in custody following a shooting in the South Loop that critically wounded someone.

A male victim was shot while arguing with the gunman about 1:15 p.m. in the 1100 block of South Clinton Street, near Roosevelt, according to Chicago police.

He was taken to Stroger Hospital with a gunshot wound to his back and torso, police said. Police have not released his age.

The alleged gunman was arrested. No charges have been filed.

Wednesday afternoon a man was critically wounded in a shooting in Gresham on the South Side.

The driver pointed a handgun out the window and fired shots before driving north on Lowe, police said.

The man was hit in the upper back and taken to the University of Chicago Medical Center in good condition, police said.

A 72-year-old man was critically wounded in a shooting  on the border of the South Shore and Grand Crossing neighborhoods.

He was shot in his back about 3 p.m. in the 7300 block of South Stony Island Avenue, according to police.

He was taken to the University of Chicago Medical Center in critical condition, Chicago Fire Department spokesman Larry Merritt said.

The day’s first reported shooting wounded a 45-year-old man Chicago Lawn on the Southwest Side.

He was walking in the 6900 block of South Artesian Avenue at 7:10 a.m. when someone fired shots, police said.

Shot in the back, he was taken to the University of Chicago Medical Center, where his condition stabilized, police said. A vehicle in the area was found damaged by gunfire.

One person was killed, and nine others wounded Tuesday in Chicago.