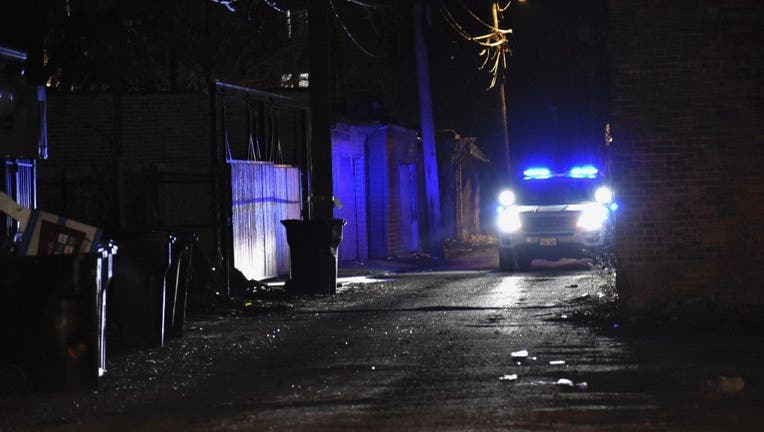 Police investigate in an alley near 19th Street and Pulaski Road after two people were shot nearby March 1, 2020. | Carly Behm/Sun-Times

CHICAGO - Four people were killed and 14 others were injured in Chicago shootings over the weekend.

The most recent fatal shooting happened early Monday in Humboldt Park on the West Side.

A 30-year-old man was standing on the sidewalk at 2:18 a.m. in the 1000 block of North Springfield Avenue when someone shot at him from a silver sedan, according to Chicago police. He was hit in the head and taken to Mount Sinai Hospital, where he was pronounced dead.

Another man was killed Sunday afternoon in Bronzeville on the South Side.

Tramen Starnes, 22, was outside a home about 4:55 p.m. in the 4700 block of South Evans Avenue when three males walked up to him and fired shots, police and the medical examiner’s office said. He was struck multiple times in the chest and taken to the University of Chicago Medical Center, where he was pronounced dead at 5:19 p.m. He lives in Bronzeville.

Earlier that morning, a man and woman were killed in a possibly domestic-related shootout that also left another man wounded in Chatham on the South Side.

A fight involving multiple people broke out about 6:40 a.m. in the 8300 block of South LaSalle Street, during which a 40-year-old man pulled out a gun and fired shots, striking 28-year-old Michael Lee and 34-year-old Takeyla Sims, police and the medical examiner’s office said. After being shot, Lee pulled out his own gun and returned fire, striking the 40-year-old in the arm.

Lee and Sims were taken to the University of Chicago Medical Center, where they both died, authorities said.

The 40-year-old man was taken to Christ Medical Center in Oak Lawn in good condition, police said. Charges against him are pending.

Two minors were among those injured in nonfatal shootings over the weekend, including a teenage boy shot Sunday afternoon.

The 15-year-old was outside about 5:50 p.m. when a dark-colored vehicle pulled up on Fillmore Street in Lawndale and opened fire, police said. He was struck in the right thigh and taken to Stroger Hospital in critical condition.

Earlier Sunday morning, a child was grazed by a bullet in West Pullman on the Far South Side.

The child suffered the graze wound about 4 a.m. near 119th and Halsted streets while in a vehicle with four other people, according to Illinois State police. Medical attention was turned down for the child, whose age and gender were unknown.

State police said the shooting was related to another incident about half an hour earlier, when shots were fired on the westbound Sibley Boulevard ramp to I-57 in Posen. Two people in the vehicle targeted in that incident were uninjured.

The most recent nonfatal shooting left a man seriously injured early Monday in Park Manor on the South Side.

The 32-year-old was standing on the sidewalk at 3:38 a.m. in the 200 block of West 75th Street when someone fired shots, striking him in the abdomen, according to police. He was taken to Christ Medical Center in Oak Lawn in serious condition.

Two men were wounded, one of them critically, on Sunday afternoon in West Englewood on the South Side.

The men, 28 and 31, were outside a home about 5:35 p.m. in the 7200 block of South Damen Avenue when someone got out of a gray Dodge and fired shots at them, police said. The younger man was struck in the hip and forearm and taken to the University of Chicago Medical Center in critical condition, while the older man was struck in the thigh and taken to the same hospital in fair condition.

Earlier that morning, two other men were shot in Lawndale on the West Side.

Officers responding to a ShotSpotter alert about 5:01 a.m. found the two men, 23 and 25, in the 4000 block of West 19th Street, according to police. They told officers they heard gunshots and realized they’d been hit. The younger man was struck in the thigh and the older man was struck in the calf. They were both taken to Mount Sinai Hospital in good condition.

The weekend’s first shooting left a 20-year-old man injured Friday night while driving in Brighton Park on the Southwest Side.

He was in a northbound vehicle at 8:55 p.m. when he heard gunfire and felt pain in the 3900 block of South Campbell Avenue, according to police. A friend drove him to Mount Sinai Hospital, where he was listed in good condition with gunshots to his arm and torso.

Five other people were injured by gunfire throughout the city between 5 p.m. Friday and 5 a.m. Monday.

A man was also critically wounded in a shootout with Chicago police Sunday afternoon in Little Village. Officers shot him after he allegedly fired at them about 3:15 p.m. in the 2100 block of South Washtenaw Avenue, according to police. He was taken to Mount Sinai Hospital in critical condition. No officers were injured in the shooting.

Man wounded after exchanging gunfire with police in Little Village

Police said a 19-year-old man was shot Sunday after shooting at two officers who tried to stop him on the street in Little Village on the Southwest Side.

On Friday, a Chicago police officer shot a man at the Grand Red Line station during the afternoon rush hour in what Mayor Lori Lightfoot called an “extremely disturbing” incident.

Last weekend, five people were killed and 17 others were wounded in shootings across the city.