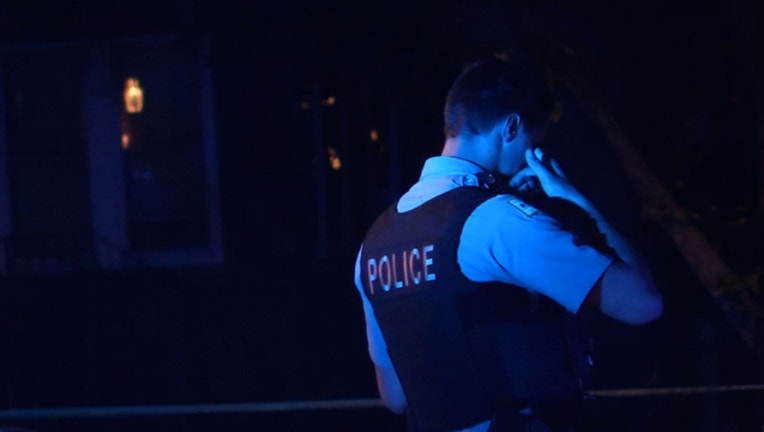 Chicago police investigate the scene where 4 people were shot, Thursday morning, in the 3400 block of West Fulton Avenue, in the Garfield Park neighborhood. | Justin Jackson/Sun-Times

CHICAGO (SUN TIMES MEDIA WIRE) - Two people were killed and seven others wounded Thursday in shootings across the city, including a single shooting on the West Side that killed a young woman and wounded three others.

Three women and a man were outside about 12:15 a.m. in the 3400 block of West Fulton Boulevard when someone emerged from a gangway and fired shots, Chicago police said.

Sharemine Pinnicks, 27, was shot in the head and taken to Stroger Hospital, where she died four hours later, police and the Cook County medical examiner’s office said.

A man, 42, was struck in the hand and taken to Stroger Hospital, where his condition was stabilized, police said.

In another fatal shooting, a 27-year-old man was shot and killed in the South Shore neighborhood, police said.

He was in the 1900 block of East 75th Street about 8:20 p.m. when someone approached and fired shots, striking him, police said. The man was pronounced dead at the scene, police said.

The medical examiner’s office has not released details about the death.

In non-fatal shootings, a man was wounded about 10:35 p.m. in front of a home in Gage Park on the Southwest Side.

The 34-year-old was walking in the 5400 block of South Talman Avenue when he heard gunfire and realized he was shot, police said. He was struck in his back, hand and foot, and was taken to the University of Chicago Medical Center, where his condition was stabilized.

Minutes earlier, a teenage boy was shot in Riverdale on the Far South Side.

The 17-year-old was standing on a sidewalk in the 13200 block of South St. Lawrence about 9:20 p.m. when two males approached him on foot and fired shots, police said. He was treated for a gunshot wound to the leg at Christ Medical Center in Oak Lawn.

Earlier in the afternoon, a man was wounded after a vehicle followed him in Park Manor on the South Side.

The 38-year-old was sitting in a vehicle about 4:05 p.m. when someone in another vehicle approached him in the 7300 block of South Perry Avenue and fired shots, police said.

He drove away, but the shooter’s vehicle followed him to the 7100 block of South Vincennes, where someone in the vehicle fired shots again, police said.

The man was struck in the shoulder and taken to the University of Chicago Medical Center, police said. His condition had stabilized.

The first reported shooting of the day happened in Englewood.

A 29-year-old man was standing on the sidewalk about 12:10 a.m. in the 100 block of West 70th Street when someone inside a gold sedan began firing shots at him, police said.

He was struck in the left leg and taken to the University of Chicago Medical Center where his condition was stabilized, police said.

On Wednesday, three people were wounded in citywide shootings.

Read more on crime, and track the city’s homicides.